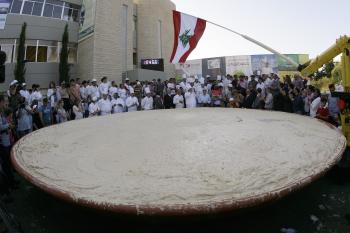 Hummus World Record: Lebanese chefs celebrate around the largest plate of hummus after setting a new Guinness world record in Beirut on May 8. The massive hummus serving weighed in at 10,452 kilograms (23,520 pounds), the size of Lebanon in square kilometers. (Anwar Amro/Getty Images)
Middle East

Hummus World Record: 12 Tons of Hummus in a Satellite Dish

James Bishop
View profile
Follow
biggersmaller
Print
More than 300 cooks were brought in to make the world’s largest plate of hummus that was so massive that it needed to be concocted in a satellite dish with assistance of a robotic arm.

After securing a satellite dish to use as a gigantic makeshift bowl, 300 Lebanese cooks got down to business simultaneously to make thousands of small tubs of hummus in East Beirut last Saturday. The tubs were then mixed together by a machine to compile the world’s largest plate of hummus. The serving size for the hummus was estimated to be just under 12 tons (US) of hummus, or just over 23,500 pounds (10,500 kilograms) of chick pea deliciousness.

Some are calling the historic hummus cook-off a food fight between cooks in Lebanon and Israel. The war began in late 2009 with the Association of Lebanese Industrialists, Kafaat Catering School & Chef Ramzi in Beirut securing the biggest hummus world record with a 4,532 pound (2,055 kilogram) behemoth of a bowl.

Chefs in Israel would have none of that, however. Jawdat Ibrahim, the owner of the namesake restaurant of Abu Gosh, a village between Tel Aviv and Jerusalem, set to the task of beating this hummus record. Israel responded by doubling the Lebanese record, at 9,017 pounds, (4,090 kilograms)

But Lebanese chefs have now clearly taken the hummus rivalry to another level by more than doubling the Israeli achievement. Both countries claim the dish as one of their national foods. There is no official word if chefs in Israel are making plans to upstage the Lebanon record for this, the current largest serving of hummus in our planetary system.

Chick peas are also known as garbanzo beans which are the Spanish translation for chick peas. There are a multitude of variant recipes for hummus that have become popular in the US, but the traditional recipe includes garbanzo beans (another name for chick peas), tahini (ground sesame paste), garlic and olive oil. Humus has been recorded as a food in the Middle East for over 7,000 years, having been used by ancient Egyptians.