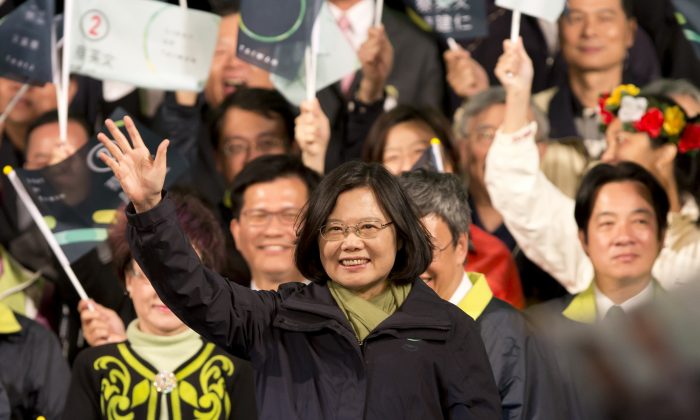 Greeted by the fizz of fireworks, flags, honking horns, and a jubilant throng of tens of thousands of citizens, president-elect Tsai Ying-wen (蔡英文) took to the stage last Saturday, in front of her national campaign headquarters in Taipei, to say a few words after her spectacular victory was confirmed.

“I’ve said that I would sacrifice my life to make you happy and now I’ve kept my promise,” Tsai told the excited crowd, her running mate Chen Chien-jen, campaign team leaders, local government heads, and other Democratic Progressive Party (DPP) heavy hitters standing behind her. “If you still have tears in your eyes,” she continued, “please wipe them. Let’s welcome a new age of Taiwan with joy.”

Thanking the crowd for their support of her and the party, Tsai went on to say the usual stuff about the need for openness, responsibility, and realism, and the imperative of handling relations with China through continuous communication, without reckless provocations. Then came the surprise first instruction to her DPP colleagues and supporters: “Be humble,” she said, “be humble and be more humble.”

It took a woman who has scaled the highest plateau of politics—the first woman ever to be elected as president in the East Asia region—to say the unsayable, to utter the word normally forbidden in high-level politics: humility (qiānbēi, 謙卑). It was a remarkable instruction, and a remarkable beginning, yet to my knowledge no journalist or political commentator has since commented on Tsai’s use of a precious word that should enjoy a special place in democratic politics.

Why is this word so special? Never to be confused with docile meekness or submission, humility is the cardinal democratic virtue, the antidote of arrogant pride: it is the quality of being aware of one’s own and others’ limits. People who are humble try to live without illusions. They dislike vanity and dishonesty; nonsense on stilts and lies sitting on thrones is not their thing. Humble human beings feel themselves to be dwellers on earth (the word humility derives from humus). They know they do not know everything; they are well aware they are not God, or a minor deity.

Humility is the opposite of haughty hunger for power over others, which is why humility baulks at humiliation. In a world of arrogance tinged with violence, humility emboldens. Unyielding, it gives individuals inner strength to act upon the world. It dislikes humbug and hubris. It anticipates a more equal and tolerant—and less violent—world. It cries out for democratic institutions that put an end to rule, if by that is meant bossing others who have few or no means of redress. Under democratic conditions, ideally, nobody rules in the sense that those who make and take decisions are subject constantly to the principle of public chastening. They are blocked from bullying others, or governing them through bribes, lies, threats, fear, or violence.

Cities as Democratic Laboratories: The Case of Seoul
What It Will Take to Address Income Inequality

Although Tsai Ying-wen didn’t quite put things this way, her call for humility last weekend had an even greater significance. In effect, she called upon the citizens of Taiwan to think of their emerging democracy as not based upon some or other First Principle—the Nation, History, God, Truth, Utility, the infallible Sovereign People, the Market, the Party, or its Leader. Tsai said in effect that democracy is a precondition of the flourishing of different values and ways of life. That sentiment is gaining ground in Taiwanese society.

She bid farewell to the commonplace view that democracy itself is an Absolute Ethic, a cut above other ethics, a necessary, non-negotiable and superior “common faith” (as John Dewey famously argued). That old way of thinking about democracy was always bedevilled by a double standard. Didn’t George W. Bush prove its duplicity by his decision to go to war in the name of God-given democracy? Isn’t democracy hypocrisy, a pompous Ideal that pretends it is against pomp, an arrogant Ideal as two-faced as the ill-famed Protestant minister who preached in his Sunday sermon that peace in the Middle East could happen only when Jews and Muslims come to believe in the Lord Jesus Christ?

No. Tsai Ying-wen’s acceptance speech reminds us that democracy is not a First Principle, philosophically speaking. It’s rather a humbling and humble ideal. Democracy is an ethic whose universality, its applicability everywhere on the face of the earth, in China as well as Taiwan, stems from its commitment to “pluriversality.” It stands for the robust protection of peoples and their biosphere against bogus First Principles and arrogant Grand Ideologies and their claims upon power. Democracy stands guard against pompous Universals, including the imaginings of Liberal Democracy and what is sometimes called Western Democracy. As Tsai Ying-wen hinted, its key ethic is humility.

Democracy is the champion of core virtues like acceptance of difference, civility, respect for legality, and non-violence. It embraces institutional pluralism, visions of complex equality, and a variety of mechanisms of public accountability that ensure that wrong-headed decisions and outright folly can be prevented, or undone.

Democracy seeks to humble. Democracy yearns to protect the weak and to empower people everywhere, so that they can get on with living their diverse lives on Earth, freed from the pride and prejudice of moguls and magnates, tyrants and tycoons. It favors the equalization of power and stands opposed everywhere to manipulation, bossing, and violent rule. This is not because democracy is True and Right. It is rather because democracy is the opponent of the powerful, especially when their lust for control comes bathed in the conviction that True and Right are on their side.

Whatever happens during her presidency—hard times are coming for her during the next four years—we should thank Tsai Ying-wen for bravely reminding us of this elementary democratic truth.

John Keane is a professor of politics at the University of Sydney in Australia. This article was originally published on The Conversation.