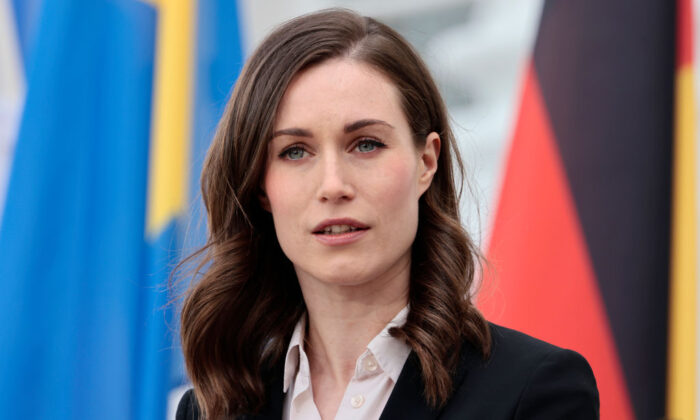 Finnish Prime Minister Sanna Marin addresses the media during the first day of a German federal government cabinet retreat at Schloss Meseberg in Germany, on May 3, 2022. (Hannibal Hanschke/Getty Images)
Viewpoints

Humility and Values the Missing Link in Politics Today

Half a century ago, a parliamentary sex scandal was averted when a quick-thinking MP rose to his feet and asked, “is there a member of this House who hasn’t at some time lusted after a woman other than his own wife?”

That did the trick. The self-righteous fire went out of the debate, and members moved on to other business.

We want to think all those politicians felt some sense of shame, but they were probably just alerted to the eternal truth that if you throw a rock at somebody, it just might be thrown back at you. Or perhaps the more reflective of them remembered that scriptural warning: “let he who is without sin cast the first stone.”

Those days are long past. Few politicians, and few of those who elect them, count parables and wise scriptural sayings as part of their mental furniture.

Christianity is dying in so many parts of the western world, and with it is dying that self-effacing humility that was the gold standard of civilized morality.

Not only dying but often mocked: humble people who are aware of their own failings and slow to criticize others are regarded as weak and insincere. On the other hand, the strong believe only in strength and have no compunction about attacking, mercilessly, anyone with an exposed flank.

So it’s no surprise that Finland’s Prime Minister Sanna Marin is facing the firing squad for her “inappropriate” behaviour in hosting a rave at her official residence. Loud music, frenzied dancing, much swilling of alcohol, at least a suspicion of drugs, and—oh the horror!—at least one female breast exposed to the sultry air.

Marin is a politician of the left, so her critics have all been right of centre. Conservatives have insisted that she betrayed the dignity of her office and that those willing to overlook the party antics of her privileged guests are demeaning the nation’s pride. They claim that she has abused her position and shown a grave error of judgement.

But the fact is that Marin is still in the top job and will probably stay there. Moreover, the sort of criticism she faced is easily dismissed by her defenders on the left as mere outmoded morality, the holier-than-thou (and slightly envious?) posturing of narrow-minded prigs.

The media have enjoyed the show—romps in the halls of the mighty are always page-turners—but serious demands for her removal have been relatively muted.

Could it have been very different if Marin had been right of centre?

Outgoing UK Prime Minister Boris Johnson, by contrast, is now yesterday’s man. No, it’s not an exact parallel, but it’s safe to say that if Johnson had been a darling of the left most of the media and many voters would have been more ready to forgive his peccadillos.

Why is this so? Is it just dumb luck that those of us who are regarded as on the right have fewer allies in a forum dominated by the left? Is it just a matter of numbers? Could clever politics and good PR turn the tide?

To some extent, they could. A fresh new narrative with clever one-liners and powerful visuals can swing elections.

That sort of glibness doesn’t do us much credit as thinking people, but both left and right have won government by the skilful use of language and imagery.

Nowadays, politicians can add Twitter to their armoury, the new nadir of civil discourse.

But the real issue here is that those old markers “left” and “right” no longer mean what they once meant. Sure, there are extremists on both sides of the political spectrum, but most of us are useful idiots.

Well-heeled inner-city elites have nothing in common with genuine socialism, yet they think of themselves as champions of the left.

On the right, there are religious people—not so many nowadays—and legions of people who have lost whatever faith they once had yet cling to remnants of the morality they learned from their parents and share a generalized sense that old ways are worth hanging on to.

Against that backdrop, it’s no surprise that young people are charmed by the left and its theoretical but vigorous idealism and are bored by the caution of their elders.

Sadly, the two groups don’t talk to each other anymore, and the fault lies on both sides: if I’m on the left, I hate the heroes of the right; if on the right, I despise the left. This grievous situation threatens to divide nations by forcing people into opposing camps that have little more than a pretend interest in the fair distribution of the world’s goods and much more to do with being on trend and talking the talk.