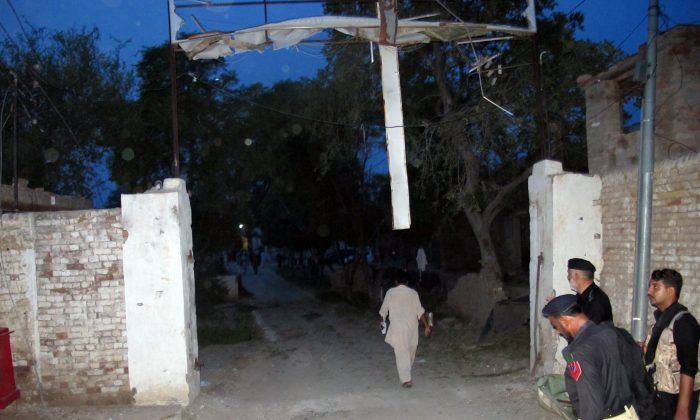 Humayoun Nabi and Ismail Alsarabbi, residents of the Queens borough of New York, were arrested over an alleged connection to the Taliban and al Qaeda. Pakistani policemen stand guard outside the Central Prison after an overnight armed Taliban militant attack in Dera Ismail Khan, in Khyber Pakhtunkhwa province on July 30, 2013. (STR/AFP/Getty Images)
Crime and Incidents

Humayoun Nabi and Ismail Alsarabbi, residents of the Queens borough of New York, were arrested over an alleged connection to the Taliban and al Qaeda.

The pair were taken into custody on Thursday after a three-year investigation found that they are supporting the terrorist organizations, according to officials.

Nabi, 27, told a confidential informant that “he hated the United States and wants to take a stand,” according to court papers cited by the New York Post.

“Nabi compared his efforts to those of Osama Bin Laden” and was “building a small army.”

Nabi discussed creating a nonprofit that would help support the organizations, including sending jackets, goggles, and GPS systems purchased in New York.

Alsarabbi, 32, was allegedly working with Nabi to buy supplies and send them overseas.

However, attorneys for the men argued that they were entrapped.

“If you have to spend more than 18 months trying to get someone to send coats and shoes to the people of Afghanistan, and you have all these cops on the case, to me that sounds like entrapment,” said Ken Finkelstein, Nabi’s attorney, reported CBS. “If you remove the police from this, you have nothing.”

“There was nothing in the complaint about bullets, guns, rockets, grenades,” said Alsarabbi’s attorney Sean McNicholas. “They were talking about sending winter coats and boots to the people of Afghanistan.”