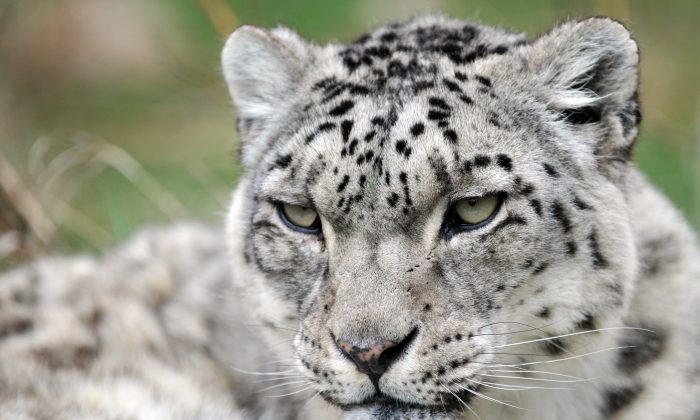 A Snow Leopard (Panthera uncia) at the NABU center (Nature and Biodiversity Conservation Union), a German organization that aims at reintroducing the cat and fighting against poaching, near the Issyk Kul lake, in the outskirts of Semenovka village, some 330 kilometers southeast of Bishkek, the capital of Kyrgyzstan on April 17, 2015. (VYACHESLAV OSELEDKO/AFP/Getty Images)
Asia & Pacific

October 23 is International Snow Leopard Day, a day set aside last year by 12 Asian countries that are home to the endangered cat, to raise awareness of its plight. Last year for the first time, cat lovers across the world celebrated Oct. 23rd as the conservation community became more committed than ever to save the beloved cat from extinction.

At that time, 12 countries marked the first anniversary of the adoption of the Bishkek Declaration, the first Global Forum on the Conservation of the Snow Leopard. The forum made a commitment to protect at least 20 landscapes as secure snow leopard habitat by 2020. They are concerned about the growing threats of human encroachment and climate change to the survival of the symbolic cat. The Declaration was signed in Bishkek, Kyrgyz Republic, one of the countries where snow leopards live.

Since 2014, warming temperatures and human intrusion have further squeezed the remaining snow leopards into smaller quarters, according to a recent World Wildlife Federation report. The WWF roughly estimates that there are as few as 4,000 snow leopards left in the wild.

Increased habitat loss and degradation, poaching, and conflict with communities have contributed to a 20 percent decline in the population in the past 16 years.

Snow leopards live in some of the highest and harshest habitats in the world, but it is a very important landscape for people such as nomadic herders. The WWF report highlights that over 330 million people live within 6.2 miles (10 km) of rivers originating in snow leopard territory and directly depend on them for their daily water supplies.

As human populations continue to expand, the mountainous habitat comes under increasing threat. While human issues can be addressed, the report notes that climate change will exacerbate them. Climate change will threaten not only the snow leopard’s habitat, but also many of Asia’s major watersheds.

Arid conditions are expected to shift the tree line higher up the mountain and expand the area suitable for crops. Increased temperatures also will foster the growth of plant species less preferable to the snow leopard’s natural prey species and change the timing of water availability. These impacts could cause more than a third of snow leopard territory to become unsuitable.

“Urgent action is needed to curb climate change and prevent further degradation of snow leopard habitat, otherwise the ‘ghost of the mountains’ could vanish, along with critical water supplies for hundreds of millions of people,” said Rishi Kumar Sharma, WWF Global Snow Leopard Leader, in a Phys.org report.

But there are gaps in studies of snow leopards. The WWF admits in its report that they don’t really know how many of the big cats are still in the wild, and can only provide rough estimates. Truthfully, they haven’t made any conservation efforts on more than 420 million acres of mountain terrain.

But the WWF is taking action. Through its Species Action Plan (SAP) the wildlife organization is focusing on critical areas and tackling the issues raised in this report.