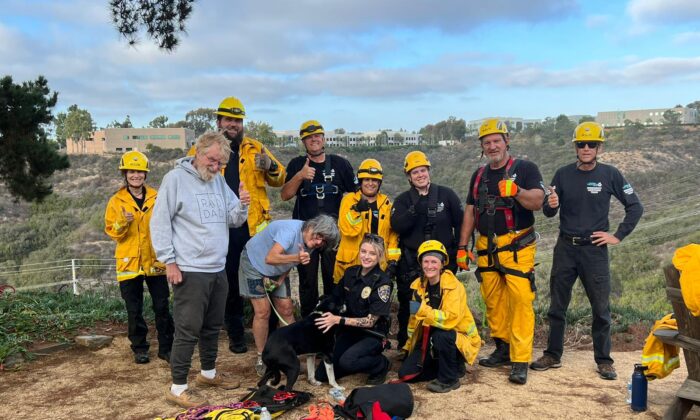 SAN DIEGO—The San Diego Humane Society came to the rescue Aug. 29 after a special-needs dog fell about 100 feet into a steep, brushy ravine in Sorrento Valley and could not get back out on his own.

The owners of the 8-year-old Australian shepherd, Hobo, called the animal welfare agency shortly before 2 p.m. to seek help for their stranded pet, who is deaf, the organization’s spokeswoman Nina Thompson said.

The organization’s emergency response team went to the family’s home in the 9700 block of Genesee Avenue and used safety lines to rappel down into the nearby canyon where Hobo was stuck.

“It then took five members to cut the dog out of the brush with a saw in order to free him … before they could get him back up,” Thompson said.

After safely rescuing Hobo, a process that took about four hours, the rescue team reunited him with his relieved and grateful owners.