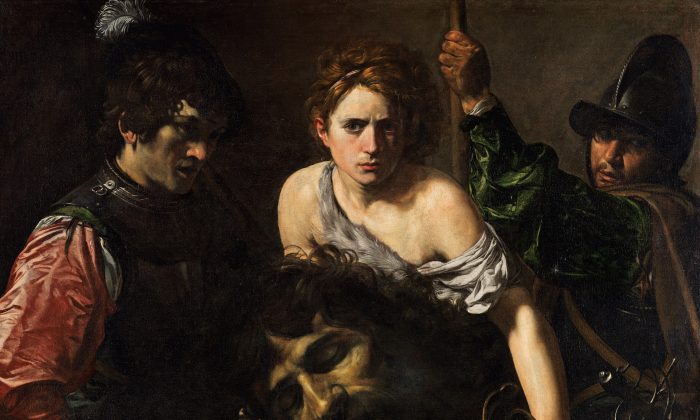 "David with the Head of Goliath," circa 1615–16 by Valentin de Boulogne (French, Coulommiers-en-Brie 1591–1632 Rome) Museo Thyssen-Bornemisza, Madrid (The Metropolitan Museum of Art)
Beyond Science

The Theory of ‘Three Human Species’

The Old Testament tells a story in which a diminutive David defeats the giant Goliath. Using just a sling to slay his enormous foe, this unlikely victor became the second Hebrew monarch.

While many consider the tale to be merely a colorful allegory, a recent finding exhibiting the oldest known Philistine inscriptions suggests that Goliath may have actually existed. This artifact—a small clay shard—was found in Israel in 2005 by Tell es-Safi University archeologists.

It is inscribed with the words “Alwt and Wlt” which, according to Professor Aaron Demsky, coincide with the name Goliath. Alwt and Wlt are non-Semitic names which are etymologically similar to the name Goliath. Studies confirm that the carving was made around 950 B.C., which would put it within 70 years of when biblical scholars believe this historic fight occurred.

While the find may lend some new credibility to an ancient tale, it may also serve as a piece to another puzzle that’s even more intriguing. One might assume that, even if the epic battle really did take place, Goliath’s size was surely exaggerated for dramatic effect.

However, evidence collected from around the globe over the last century suggests that the existence of a real giant may not have been that strange after all. In fact, these finds have led some to believe that the mankind of antiquity may have come in three distinct sizes: giants, humans, and hobbits.

In the fall of 2004, a group of investigators working in Indonesia found remains of a race of “hobbit” men measuring just over three feet. Researchers determined that these smaller humans had existed alongside man until about 13,000 years ago.

The research team—including Indonesian paleoanthropologist Professor T. Jacob—dubbed the small race Homo floresiensis, named after the Indonesian island of Flores where the skeletons were uncovered. Some say these hobbits still roam the jungle, prompting many visitors to the island in recent years in search of a myth incarnate.

The wealth of evidence for a race of giants is even greater. Remains of giant humans have been found in practically every part of the globe: Tunisia; Pennsylvania; Glen Rose, Texas; Gargayan in the Philippines; Syria; Morocco; Australia; and throughout the Urbasa mountain range in Spain. Perhaps the most popular and scientifically recognized example is the “Giant of Java,” found just south of China.

Similar human remains that were found in nearby southern China reveal large humans who possessed six digits on each extremity. This polydactyl characteristic seems to have been a regular pattern in this race of men, as other examples have shown. In Soviet Georgia, skeletons were found of men between 9 and 10 feet tall that also possessed six digits on the hands and feet.

Among several biblical passages that mention the existence of giants, Samuel 21:20 also observes this extra-digit phenomenon: “In still another battle, which took place at Gath, there was a huge man with six fingers on each hand and six toes on each foot—twenty-four in all.”

Despite the vast amount of skeletal evidence—as well as the unearthed tools and teeth that would otherwise prove comically large by normal human standards—it seems that there are still not a great number of scientists dedicated to studying this phenomenon.

The modern world often regards mention of these different-sized human races in ancient texts and folklore as the product of a vivid imagination—though many different cultures record very similar accounts. However, in light of the various remains uncovered throughout the world, perhaps these “mythical” stories may have actually been accurate depictions of life at that time.

If these races of various size did exist, why three sizes, and where did the other two go? Did they have amicable or hostile social relations with our ancestry? Did they help each other? Ignore each other? What social structures did they have? For now we can only look to the stories of the distant past and wonder how many more myths are waiting to reveal themselves with concrete evidence.