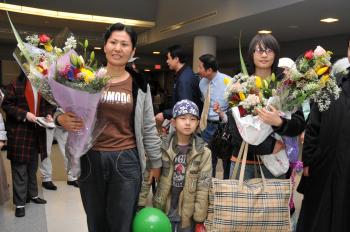 Last week I was surprised by a phone call in which my parents said they were calling me from their home phone. Since I first came to the United States in 1997, they had never done this before. While the living expenses in China have increased several times, their salaries have remained the same. So making a phone call overseas is a luxury for them, and I have always insisted that I should call them. They usually ask my sister to email me if I haven’t called for a while. This time was different.

My dad tried to lecture me—about how I should behave and avoid criticizing the Chinese Communist Party (CCP). I tried twice to stop him, as I didn’t want to waste his money, and I didn’t like this kind of propaganda talk either. But he called me twice in order to finish his “education” of me. I imagine that he was actually talking to a “third ear,” as the phone was tapped. I also understood that he had been pressured to make such a phone call and had prepared such a speech.

This is not the first time my dad has had to lecture me in this way. Since July, 1999, when the persecution of Falun Gong was launched by Jiang Zemin, the former head of the CCP, my parents and uncle have been continuously harassed and threatened. “Public security” and “national security” officers “visited” my parents and “asked” some information about my siblings, and pressured them to “educate” me.

In fact, the “visit” by those officers works against public and national security. Their “visit” and “education” were not welcomed, as they come with huge pressure and threatening messages. They made my parents less secure, not more.

When they “asked” for information about my friends and other relatives that just means that my friends and relatives will be subject to implication (zhu lian). For this reason, my parents, uncle, brothers and sisters have been asking me not to speak out for Falun Gong, a meditation and spiritual practice based on noble moral principles—truthfulness, compassion, and tolerance.

The phone call from my father helps illustrate how implication is used by the CCP as a strategy of persecution. If you dare to speak out for human rights, not only will you suffer—that is for sure—but also your family members and relatives. Many times, the pressure is so huge that even your family members and relatives are forced to speak against you.

The practice of implication was usually adopted in very dark periods of the Chinese history, usually near the end of a dynasty. But the CCP has from the beginning never appeared hesitant to resort to this base means, most obviously in the dark period of the Great Cultural Revolution when spouses, children, parents, and friends were pressured by the authorities to attack each other. Many families were shattered as a result.

In traditional Chinese society, the family is the last resort for love, care, and protection, but the CCP has never hesitated to use family as the sharpest weapon to strike at those who remain true to their conscience. In today’s China, Falun Gong adherents and their supporters are the most obvious example of those subject to implication.

The family of the Christian human rights lawyer Gao Zhisheng is a prominent example. After Gao wrote open letters demanding an end to the persecution of Falun Gong in China, his wife and children were subject to house arrest and intense abuse. His daughter, Gege, tried to commit suicide in despair at the treatment she and her family suffered.

The use of implication greatly complicates the fight by the Chinese people for freedom and human rights. All resources are tightly controlled by the regime, directly or indirectly. There are no real property rights, even in one’s own home. One can easily be kicked out, if the Party labels you as anti-government or as an anti-Party activist.

If a person is brave enough to challenge the authorities, the family cannot be counted on to be the last resort for help. The person who remains true to the dictates of conscience must be prepared to stand alone against the might of the state. In fact, one’s family may even be pressured to join in opposing one, saying things that are untrue.

The practice of implication highlights how essential is the support of human rights in China by international society. Given the high price that must be paid by those who fight for human rights or engage in political dissent, those outside China must speak out. Those inside China who do speak out risk their lives and are worthy of high respect.