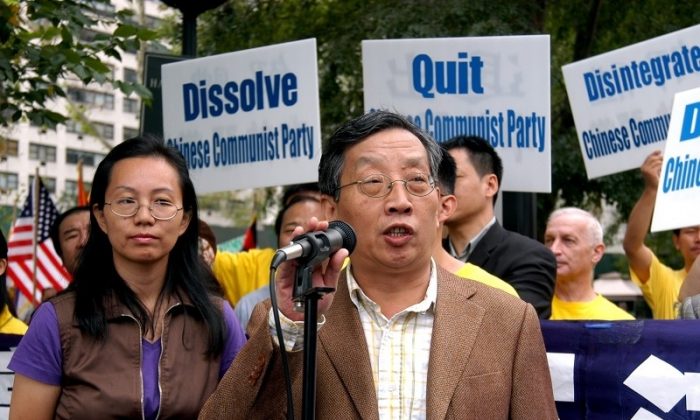 Hu Ping (C), founding editor of the Beijing Spring magazine, gives a speech at a rally against the persecution of Falun Gong in front of the United Union in New York City on Sept. 22, 2011. (Huang Yiyan/Epoch Times)
China

Since the end of May, over 10,000 Chinese citizens have filed criminal charges against Jiang Zemin, the former head of the Communist Party. It is a laudable move, says the former editor of a Chinese pro-democracy publication, but one that needs global support to ensure the petitioners’ safety.

“I strongly support the action of Falun Gong practitioners, especially because it’s initiated by practitioners on the mainland,” said Hu Ping in an interview with Epoch Times. Hu, 67, is the founding editor of Beijing Spring, a prominent overseas Chinese online magazine that covers China’s democracy movement, social justice, and rights issues.

Hu thinks that the campaign to sue Jiang will gain the attention of China’s society, and could lead to an outpouring of public dissatisfaction over the persecution, which has long been suppressed.

Practitioners of Falun Gong, a traditional Chinese meditation practice that involves slow moving exercises and adherence to moral principles, have lodged criminal complaints against Jiang en masse over the last two months; he’s being accused of crimes against humanity and genocide. Zhang Zhaosen, a Falun Gong practitioner, was the first in the recent wave of complaints to hand his petition to a public prosecutor and leave unharmed.

Before Zhang, attempting to use the Chinese judicial process to punish a former top Party leader was largely unthinkable, especially for a persecuted population like Falun Gong practitioners. A little over a year after Jiang started his campaign to persecute Falun Gong, in 1999, two practitioners lodged complaints against Jiang. One was tortured to death in jail, while the other served a five-year prison term, during which time all his teeth were knocked out.

Because it is still “very risky” for Falun Gong adherents in China to openly call for their chief persecutor to be held responsible for his actions—over 3,800 practitioners were persecuted to death and hundreds of thousands have been detained and abused, according to Falun Gong website Minghui—Hu Ping advocates promoting the news more widely on the mainland and overseas to ensure the safety of the plaintiffs.

Hu says that not many people on the mainland are aware that a campaign to have Jiang indicted is underway, due to the regime’s censorship. Those outside the country can help spread the news through the Internet to “reduce the danger mainland Falun Gong practitioners are facing,” Hu says.

Hu is aware that some people are still “echoing the Party’s slandering against Falun Gong,” even 16 years after the beginning of the defamation campaign. Ultimately, he said, “the issue is whether people have the basic freedom of belief and expression.” The Party’s “blatant brutality” towards those who keep their faith “should be firmly objected to by all.”