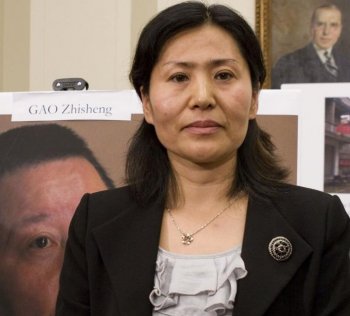 HUSBANDLESS: Geng He, wife of civil rights attorney Gao Zhisheng. Gao has released several letters detailing the torture he was subjected to while in captivity. He is currently being held in extralegal custody, and his whereabouts and welfare are unknown. (Lisa Fan/The Epoch Times)
Opinion

WASHINGTON—It would be best if, hours before Hu Jintao’s arrival, human rights atrocities in China were not relegated to being discussed in a small, overheated room tucked away in a Congressional office building—but those who concern themselves with the topic will usually take what they can get.

What they got was dozens of journalists and observers shoulder to shoulder in a committee room in the Rayburn Building, where they expounded upon, often in painful detail, the Chinese Communist Party’s apparently insatiable appetite for destroying human life.

Rep. Smith led off with prepared remarks. We should hope that President Obama reads them. One good point Smith made: Nobel Peace laureates (Obama in this case) shouldn’t sit down and eat dinner with someone (Hu) who has locked up another Nobel Peace laureate (Liu Xiaobo), certainly not before publicly demanding the fellow’s release.

Geng He, the wife of Gao Zhisheng, then spoke. Gao Zhisheng is one of China’s leading human rights lawyers. His whereabouts are currently unknown, but an account of his torture was recently released by the Associated Press and, soon after, a letter he had written in 2009 was also released. Both moving documents, they show the extraordinary cruelty the Chinese Communist Party (CCP) is capable of toward individuals who dare to stand up to them and not be cowed, particularly on such sensitive issues as Falun Gong.

Next spoke Congressional Representative Frank Wolf, whose plainspoken and honest remarks, which didn’t take him long to make, causes one to ponder why more Congressional representatives don’t do it. Wouldn’t it send the right message if hundreds of representatives lined up (the timing would be scheduled of course, so no one had to wait around) and, one after another, said their own piece of denouncement of the CCP’s sinister activities in labor camps, jails, and elsewhere? At least, it would be a media spectacle, and greatly raise the profile of this marginalized topic.

Toward the end of his remarks Rep. Wolf made one clearly important and one opaquely ironic remark. The important one was, with reference to a Soviet dissident: “When someone raised their case publicly, it made a tremendous difference. There’s an obligation and requirement to say it not only privately but publicly, where the world can see it.” The ironic remark was, after he listed groups in sequence, he said: “also the group that almost no one wants to mention, what they’ve done to the Falun Gong.” It’s ironic because, for one reason or another, there was no Falun Gong speaker lined up on the dais.

An audience member asked why the Obama administration was “studiously silent” about the Falun Gong issue. Rep. Smith jumped all over it. The CCP has directed “special callousness and cruelty … toward the Falun Gong, for some reason unbeknownst to us. The regime sees Falun Gong as a threat, which they are not; they are peace-loving and peaceful people. … There is a paranoia on the part of Hu Jintao that has led to enormous cruelty that has to stop. It has not abated, it has gotten worse in most instances. It’s mostly because the West has gone silent on human rights abuses … there are implications to the world. China is spreading its governance model,” particularly in Africa, Rep. Smith said.

The next speaker was Ngawang Sangdrol, a Tibetan woman who was locked up as a child and had a particularly terrible story to tell. She was abducted for protesting. She was routinely beaten with iron rods, hoses, etc. Being kicked and slapped was so usual that they didn’t count as beatings. At one point, she said, a guard showed her an odd-looking metal object and asked her if she wanted to call her home. She replied that her home didn’t have a telephone. “He said he would install one, then he put the object in my … and turned it on, my body was shocked in a way that I cannot control. I was only 13 years old. They tried everything to break my spirit.”

Next was Chai Ling, a former leader of the students on Tiananmen, who spoke about the abuse of babies and women, including gendercide (sex-selective infanticide), sex trafficking, and other “brutal and violent” acts. “It is a Tiananmen massacre happening every hour,” she said. Then Bob Fu, activist for underground Christians, and Rebiya Kadir, Uyghur spokesperson, among others, spoke.

Ms. Reggie Littlejohn, an advocate for ending the one-child policy and its depredations, said the Obama-Hu meeting would be a charade if Obama didn’t raise the CCP’s grotesque forced abortion policy. Crushing the life inside the most intimate part of a woman’s body is a heinous crime against humanity, she pointed out.

Rep. Smith had too much heart to cut short the speakers who got a bit long-winded, but if that’s the only failing of Chinese human rights activists, they have a lot more going for them than most other groups out there.

Circling back to the question of why more people don’t do what Mr. Wolf did, it could possibly be related to what he himself said: “The people of China are good people; the people of China should know the U.S. stands with them in the struggle for freedom and democracy.”

The deeper point to his statement is this: the level of engagement that most groups take with China is on the level of state-to-state discourse (viz. the state visit). What Wolf suggests is (somehow) engaging directly with the people of China in their struggle against the Party’s tyranny … but this necessitates estrangement from the relations with the Party, whose interests are opposed to those of the people, and whose interests would-be engagers would be thus opposing.

So, do you pick the Chinese Communist Party, or China?

If you must engage with the leaders of China’s Communist Party, just remember Rep. Smith’s words: “Look them in the eyes and hold them to account.”