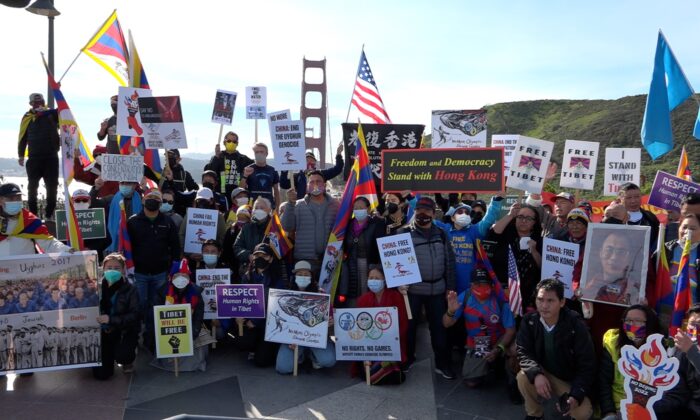 SAN FRANCISCO—Thirteen human rights groups crossed the Golden Gate Bridge and went to the Chinese Consulate in San Francisco on Feb. 4 to express their opposition to the holding of the 2022 Winter Olympic Games in China.

The groups told NTD Television that the Chinese Communist Party (CCP) has a long track record of human rights abuses.

“Today, we’re here to do [what] we’ve continued to do; it’s to ask the world not to turn a blind eye to the incredible destruction that has happened to the lands and peoples of Tibet and our allies, like the east Turkistans, the Uyghur, and Falun Gong, and Chinese [democracy] groups,” Giovanni Vassallo, president of Bay Area Friends of Tibet, said at the rally near the bridge.

Vassallo cited the lack of freedom in areas under the CCP’s control.

“Six million Tibetans are in the largest prison camp today. According to Freedom House, Tibet is the least free country on earth, tied with Syria,” Vassallo said.

Vassallo referenced the movement to boycott the 1936 Berlin Olympics. During that time, countries expressed opposition to Berlin as the host city due to reports of the Nazi persecution of Jewish athletes in 1933.

Speakers at the San Francisco event encouraged people to stand up and speak out against the CCP’s modern-day persecution and suppression of ethnic and religious groups and political dissidents.

“You know the movement is never going to end because the human rights abuses by the Chinese government do not end,” said Christina Olague, a former San Francisco supervisor.

After the rally at the bridge, the groups marched a total of six miles toward the Chinese Consulate.

“We’re here today to say to the world that the spirit of the Olympic Games is 100 percent incompatible with what the international community is allowing to happen in Beijing,” said Kasim Tamur, a representative from the Bay Area Uyghur Community.

At the consulate, representatives from Tibet, Hong Kong, Taiwan, the Uyghurs, Vietnam, and the Philippines joined the rally to express their support for the groups calling for a boycott of the Winter Olympic Games in Beijing.

“China is making use of the international sporting event to divert people from focusing on the human rights abuses that they are committing,” said Ariel, a member of Students for Hong Kong.

“The brutal policies of the Chinese government are increasingly being recognized by the diplomatic boycotts from countries including the U.S. and others. The 2022 Beijing Winter Olympics run a serious risk of legitimizing these abuses,” said Lousang Chodon, a representative from the San Francisco Regional Tibetan Youth Congress.

The modern Olympic Games have existed for 125 years and have faced a handful of cancellations, bans, and boycotts due to geopolitical conflicts. Throughout the history of the quadrennial international competitions, countries have officially boycotted the games a total of six times, with as few as three countries sitting out in 1964 and as many as 65 nations staying home in 1980.

In December 2021, the Biden administration announced a diplomatic boycott of the Winter Games, with 14 other countries joining the decision in the weeks that followed.