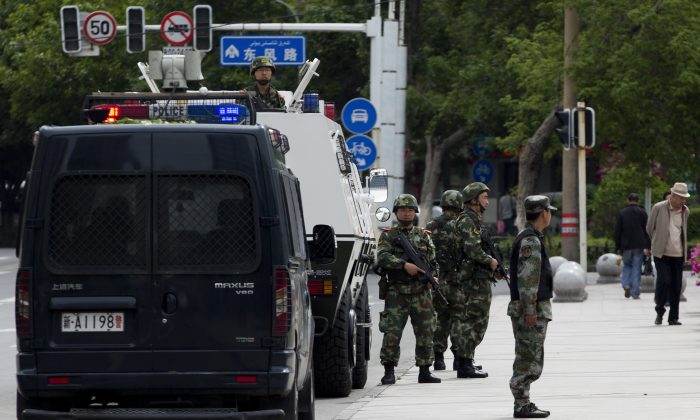 In this Friday, May 23, 2014 photo, armed Paramilitary policemen stand guard next to their Armored personnel carrier parked near the People's Square in Urumqi, in China's northwestern province of Xinjiang. A human rights group says 100,000 Chinese troops are headed to the restive province. (AP Photo/Andy Wong)
China

As intense games were being played at the Fourth Plenary Session of the Chinese Communist Party’s 18th Congress, the Chinese regime found itself mired in both internal and external difficulties.

How the CCP is to deal with the pro-democracy movement in Hong Kong, how to deal with the ousted former security chief Zhou Yongkang, who is currently under investigation—these are some of the difficult issues that have hung over the Plenary Session, which will ran until Oct. 23.

Adding to these troubles was the recent ethnic violence in the western Chinese province of Xinjiang.

A recent series of clashes has left over fifty dead and hundreds injured. According to the Hong Kong-based Information Centre for Human Rights and Democracy, the Chinese regime is set to deploy 100,000 troops to the province in support of local police.

According to information released by the Information Center, in the ten days from Oct. 10 to Oct 20, violence in Kashgar Prefecture resulted in the deaths of over fifty people. Over a hundred were injured.

It is not the first time that violence in Xinjiang has overlapped with important moments of political decision.

On July 28, the day before Zhou Yongkang’s investigation was publicly announced, violence in Xinjiang’s Shache County left 96 dead and 13 injured. Police made hundreds of arrests.

During the Conference on Interaction and Confidence Building Measures in Asia (CICA) summit this May, an explosion in the outskirts of Xinjiang’s provincial capital Ürümqi killed at least 31 and injured 94, according to official sources.

It is speculated that Xinjiang is under the jurisdiction of those allied to former CCP leader Jiang Zemin, with whom Zhou Yongkang has close ties. Zhou Yongkang has been possibly the most significant target of current leader Xi Jinping’s latest anti-corruption purges. There may be more than mere coincidence at work in the timing of violent conflicts in Xinjiang.

Bo Xilai, an up-and-coming politician in charge of the megacity of Chongqing, was being groomed for power by his Jiang faction benefactors. When in early 2012 his police chief Wang Lijun escaped to the American consulate and then was whisked away to Beijing for investigation, Bo himself came under scrutiny and was put on trial.

On the eve of Bo Xilai’s trial last August, violence broke out in Xinjiang’s Kargilik County when elements of the local Public Security Bureau went to investigate a gathering of Uyghurs, who make up the largest ethnic group in Xinjiang. A conflict between the two parties resulted in 16 deaths and 20 injuries, including one dead policeman. 60 Uyghurs were later arrested.

Control of Xinjiang has for many years fallen to Wang Lequan, who is known as the “stability secretary” for his hardline policies, especially towards ethnic minorities such as the Uyghurs. With backing from Jiang Zemin and Zhou Yongkang, a deadly incident in Xinjiang that occurred in July of 2009 was not investigated. Wang was later made deputy secretary of the Political and Legal Affairs Committee, which was headed by Zhou Yongkang until his recent downfall.

The county of Maralbexi in Kashgar is in a state of siege, the Information Centre said. In a rare move, Chinese troops have entered the area and imposed martial law. They have been stationed in every village and at traffic arteries, filling in where Xinjiang’s Armed Police cannot.

The Information Centre said that one of the decisions likely to be made at the ongoing Fourth Plenary Session of the 18th Communist Party Congress will be to deploy 100,000 troops to reinforce the mobile arm of the People’s Armed Police operating in Xinjiang.

According to Radio Free Asia, thousands have perished in Xinjiang’s ethnic violence.