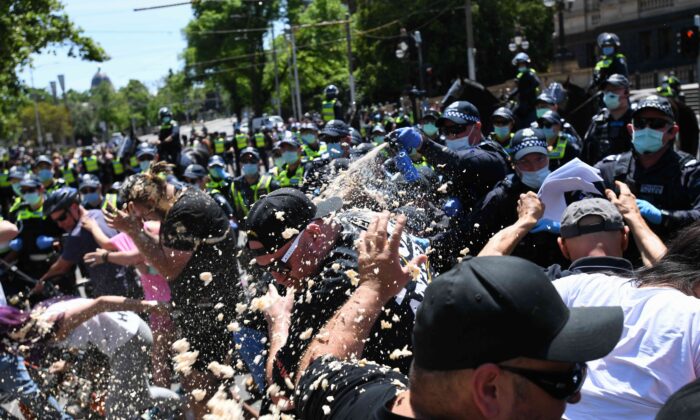 Police use OC spray on protesters during an anti-lockdown protest in Melbourne, Australia, on Nov. 3, 2020. (AAP Image/Erik Anderson)
Australia

Victorian Liberal Democrats MP David Limbrick has said that human rights don’t disappear during times of crisis after Victorian Police arrested 404 people and fined a further 395 at an anti-lockdown rally in Melbourne.

An estimated one thousand people gathered outside Victoria’s Parliament House on Nov. 3 to protest the state’s severe lockdown restrictions.

Limbrick, who attended the rally to listen to the concerns of the protestors, said that he was fined for violating the Chief Health Officer’s (CHO) order not to gather in groups larger than 10. But Limbrick said he believed he had not breached any laws.

“I was there doing my job. And, yeah, I’m not happy with the way that the police conducted the operation at all,” Limbrick said.

He said now that Victoria’s COVID-19 case numbers were at zero the people should get their rights back.

Despite the easing of the state’s restrictions, many are concerned that the legislated powers remain in place—such as the Emergency Powers Bill which grants authorities extended powers to enforce the CHO’s directions.

The COVID-19 Omnibus (Emergency Measures) Act 2020 (pdf) was also extended on Oct. 20 and expires in six months unless otherwise changed by the state.

“My concern here is … the government is sort of picking and choosing who can protest, which is totally unacceptable in a democracy,” he said.

He noted that the CHO rules were not significantly different between now and June, though the police response was.

It was estimated that thousands of people attended Melbourne’s BLM rally in June but this did not result in widespread fining; although the two main organisers were fined days after.

A critic of Premier Daniel Andrews’ response to the pandemic, Limbrick believes the premier is incapable of fighting the pandemic and providing Victorians with a free society.

“Other countries have managed to come up with solutions that don’t rely on emergency powers and coercive measures,” said Limbrick.

This view is not curtailed by the state health minister’s comments when he said that keeping Victoria safe and open was more important than the democratic right to protest.

“People who want to get around the rules, in smart-alec approaches, are just asking for trouble,” Health Minister Martin Foley told reporters before Tuesday’s demonstration.

“Don’t protest. Now is not the time to protest. Keep safe, follow the rules and keep us open,” Foley said.

Victoria Police told The Epoch Times that they “will not hesitate to fine those who clearly and blatantly breach the chief health officer directions.”