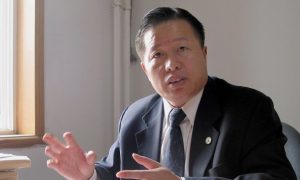 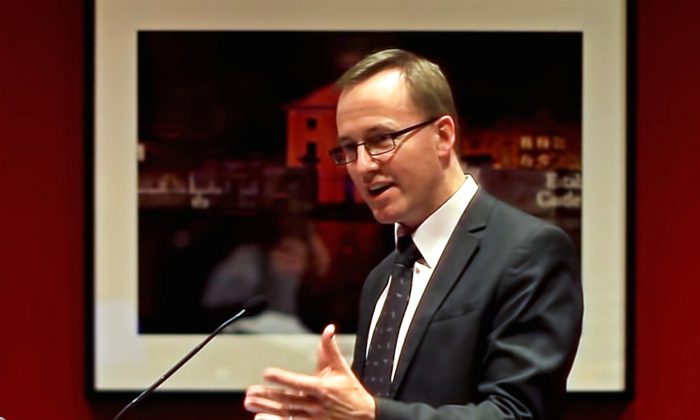 New South Wales MLC David Shoebridge speaking at the screening of 'Transcending Fear: The Story of Gao Zhisheng' which he hosted in the New South Wales Parliament on June 18, 2014. (Shakespear Media)
Australia

Human Rights Commissioner Tim Wilson and former commissioner Dr Sev Ozdowski spoke at a screening of Transcending Fear, a documentary about detained Chinese human rights lawyer Gao Zhisheng. Gao suffered repeated detention, physical and emotional torture and ongoing harrassment of his family for defending those at the mercy of a corrupt administration.

Mr Wilson said more needs to be done to educate and encourage the public to speak out about rights abuse in China, noting that legislators in Australia could only act if the public demanded it.

“I think in Australia there is too much comfort about things being out of sight and therefore being out of mind, and that is why I reiterate my point that politicians have to understand that these issues matter to the public,” he said.

According to polls conducted by Sydney think tank the Lowy Institute, the majority of Australians are uncomfortable with China taking a leading role in the region, with many seeing the country as a potential military threat.

Mr Wilson, who was appointed by the Abbott Government, said he believes the Government is taking a stand on certain rights issues but should do more.

“I think in part the current government partly agrees with that attitude but they need to take it to a much higher standing,” he said.

Dr Ozdowski, who authored a landmark report on children in immigration detention, noted that life looked alright in China on the surface.

“Plenty of people go there, but this film is showing you very strongly the undercurrent which is there at the moment,” he said.

Dr Ozdowski experienced firsthand the Soviet occupation of Poland and said the film illustrated clearly the oppressive nature of a communist state.

“The Communist Party [in China] runs the show – if the rules are not convenient then the courts are told ‘do not administer them’. When you need to torture somebody that person does not have the rights of a human being, that person is simply a product of the state.”

He said it was in Australia’s interest to have a democratic China and he called for a bolder approach to human rights than has been evident to date.

“It is in our interest to have a country where people can determine what actions their government can take. Otherwise China is a bit dangerous,” he warned.

The screening, which took place in the New South Wales Parliament June 18, was hosted by Greens MLC David Shoebridge.

Mr Shoebridge, a lawyer, reminded the audience that Australians were privileged to live in a place where rule of law was respected and where disagreeing with the Government did not mean arbitrary arrest, torture and humiliation.

“But Gao Zhisheng, who was named by China itself as one of their top 10 human rights lawyers, faces quite a different legal environment,” he said on introducing the film.

In the film, Mr Gao is interviewed in his home between arrests and talks freely about why he took up class actions against Chinese authorities for the abuse of Chinese family planning practices; why he took on the cases of land owners tossed from their homes to make way for the Beijing Olympics; and why he took to defending Falun Gong practitioners when he knew the outcome was already stacked against him.

He describes the horrific torture he endured and admits that it was only when conditions for his wife and two children were made unbearable that he consented to renounce his position. The harassment continued, however, and to date he remains “disappeared”, although there are reports he is being held in the north of China.

The Hon. David Kilgour, a former Canadian Secretary of State, Asia Pacific, and author of a report on illegal organ harvesting of Falun Gong practitioners in China, joined the discussion via Skype from Canada.

He lauded Mr Gao for his courage and described him as a combination of Nelson Mandela and Mahatma Gandhi. “Mr Gao is one of the most extraordinary human beings on the Earth,” Mr Kilgour said.

Chinese Australians, also among audience members, asked why there was not more coverage about lawyer Gao in the press. A former Chinese dissident, now living in Australia, suggested that perhaps the name of the street the Chinese consulate was on in Sydney should be changed to Gao Zhisheng Street to drive the message home.

The US House Appropriations Committee voted June 24 to rename the road in front of the Chinese Embassy in Washington “Liu Xiaobo Plaza” to highlight the Nobel Prize-winning dissident’s continuing detention and Beijing’s horrendous human rights record.

Mr Shoebridge said it was important to support people fighting for human rights in China and encouraged people to contact their state and federal representatives to express their concern.

A motion to free Mr Gao, to end discrimination on the basis of religion or belief in China and to ensure the Australian Government presents its concerns about human rights abuses in China was presented and passed at the screening.