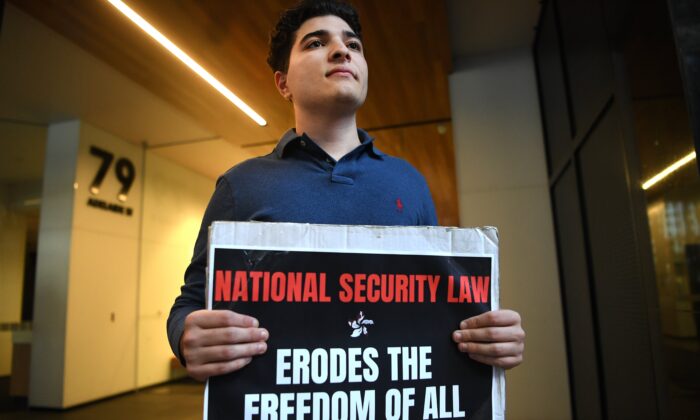 University of Queensland student and activist Drew Pavlou takes part in a protest in support of Hong Kong, outside the Chinese consulate in Brisbane, Australia, on May 30, 2020. (Dan Peled/AAP Image)
UK

An Australian human rights activist who said he was arrested in London because the Chinese Embassy framed him for sending a fake bomb threat left the UK on Saturday.

Drew Pavlou previously said he was told by London’s Metropolitan Police that he couldn’t leave the country. In two videos posted on Twitter on Saturday, Pavlou can be seen speaking at an airport before walking down the aisle in a plane.

Pavlou, a vocal critic of the Chinese communist regime over its human rights abuses, traveled to London in July to highlight the disappearance of Chinese tennis player Peng Shuai at Wimbledon.

Before leaving the country, he decided to stage a small protest in front of the Chinese Embassy in London on July 21, but he and his companion, a 22-year-old man identified by Pavlou as Harry, were arrested by the police at the embassy.

The police told The Epoch Times at the time that staff at the Chinese Embassy in London had alerted them to a bomb threat made by email. They also said Pavlou had some glue and was trying to glue his hand to the outside of the embassy building.

The police said the two men were both arrested on “suspicion of trespass on diplomatic premises, communicating false information to make a bomb hoax, and criminal damage,” and were both bailed without charge.

Speaking to NTD on July 28, Pavlou said he “wish[es] to God” he hadn’t tried to glue a Taiwan flag to the gate of the Chinese Embassy.

“Because [the] Chinese Embassy had reported me as for a bomb threat that morning, and I was walking into a trap, little did I know.”

Asked what evidence there is that suggests the embassy was behind the email, Pavlou’s lawyer Michael Polak said circumstantial evidence “points to it being someone connected to the embassy” because the email was sent on “the very day” Pavlou decided to protest at the embassy and that Pavlou had told him about being watched at his accommodation.

Polak said the Chinese ambassador “should be expelled” if the embassy was “perverting the course of justice trying to set him up for a serious offense,” and that they were asking the police to drop the case because they can not get a fair trial unless the police can check Chinese Embassy’s computers, which the embassy “is not going to allow.”

Pavlou, who previously said he had been couch-surfing in London, also said there had been people filming his address “for hours on end” and a person with British accent threatening him that “the party” is going after him.

Boarding a plane on Saturday, Pavlou thanked the Australian High Commission for helping him get out of London in a video. He also said the police investigation is still ongoing and that he will be back in London in October to defend himself.

The Metropolitan Police didn’t provide any update regarding the case when approached by The Epoch Times.