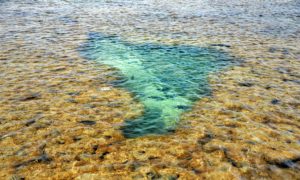 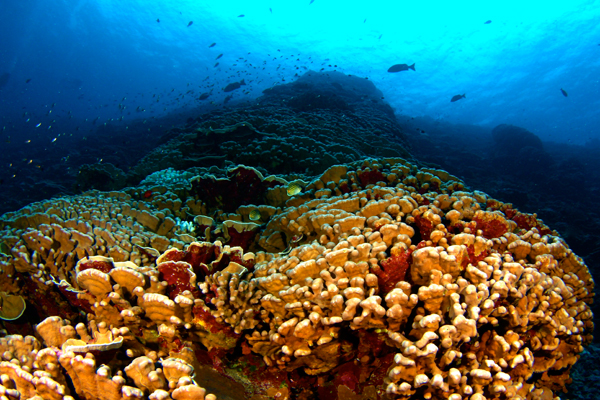 A largely pristine coral reef in the remote Pacific on an island largely unpopulated by humans. Photo by: Brian J. Zgliczynski.
Environment

There is a growing consensus among scientists of all stripes that we have entered the age of the Anthropocene, or the epoch of humans. In other words, at some point between the 12,000 years separating the beginning of agriculture and the Industrial Revolution, humans became the dominant source of change on the planet, shaping everything from the land to the atmosphere to even the geologic record where we etch our reign.

Scientists are only now beginning to catalog the many ways in which the Anthropocene has upended the usual course of nature, and a new, groundbreaking paper in Ecography highlights this. According to the researchers from Scripps Institution of Oceanography and the National Oceanic and Atmospheric Administration’s  (NOAA) Coral Reef Ecosystem Division (CRED), human impacts are causing biophysical decoupling in many of the world’s coral reefs.

But, that begs the question: what’s biophysical decoupling?

Lead author of the study Gareth Williams said his team coined the term “biophysical decoupling” to describe what they were seeing in coral reef islands with dense human populations versus remote reefs. According to Williams, the workings of ecological communities in human-dominated coral reefs have essentially “decoupled from their surrounding environment and instead echo chronic human-induced change.”

“Humans have effectively altered the natural rules of nature,” Williams, with the Sandin Lab in the Center for Marine Biodiversity and Conservation at the Scripps Institution of Oceanography, told mongabay.com.

Scientists have long recorded how human impacts can simplify ecosystems through wiping out some species or favoring others. Impacts can go so far as to push ecosystems into previous successional states, such as primary forests chopped down to be replaced by early successional forests, favoring light-loving plants.

But biophysical decoupling goes one step further: It alters the ecological community so far that it becomes both disconnected from the rules followed in pristine ecosystems leading to unpredictability. For example, if a warmer ecosystem predicts a higher abundance of a certain species, a decoupled ecosystem will no longer see the same abundance—despite the same physical components.

Essentially it becomes a “novel ecosystem”—a relatively new idea in ecology—where human pressures create a new environment, operating under human pressures, that looks little like what it replaced.

“Try to imagine a world without humans and the changes they induce on nature,” Williams explained. “It is difficult to do I admit, but is necessary to understand our story. In such a world an ecological community should be reflective of long-term adaptation to its surrounding natural environment. However, humans act as an artificial selective pressure that can change ecological communities in such a way that they no longer follow this expected rule.”

And, indeed, the team found that degraded reefs near human populated areas no longer followed the rules.

To explore how human impacts may be shaping coral reef communities, Williams and his colleagues began by doing something enviable: visiting hugely remote, almost wholly untouched coral reefs in the deep Pacific.

“The first time I visited one of the world’s most remote coral reefs I saw more sharks and big fish and more coral on a single dive than I had seen in my entire career as a marine biologist,” said Williams. “It made me realized what a coral reef could be like when alleviated of local human pressures.”

These pristine reefs—far from local human impacts like pollution, overfishing, and invasive species—are like time-capsules, allowing scientists to study with some confidence what these ecosystems may have looked like before the Anthropocene. Such examples—either on land or in the seas—are increasingly difficult to find in today’s world, making these reefs vital baselines.

“Human impacts are so pervasive across all of Earth’s ecosystems that it makes it near impossible to find baseline replicates within any one system that can act as a control—that can act to show you how a system should behave if you remove the confounding effects of people,” explained Williams.

On the other hand, coral reefs near human populations have been decimated by the barrage of impacts. Some are considered among the most degraded ecosystems in the oceans, making coral reefs a timely comparison of before-and-after ecosystems.

In all, the team compared data gathered under NOAA’s Pacific Reef Assessment and Monitoring Program (RAMP) from a total of 39 different coral reef islands. Of these, the majority were in unpopulated areas—24 reefs—and the remaining 15 were densely populated. The researchers focused on data of benthic organisms—or those that live on the reef floor—such as hard coral, crustose coralline algae, and macroalgae. They also used satellite-derived data and modeling to measure sea surface temperature, light, wave energy, and phytoplankton using chlorophyll-a as a proxy.

Comparing the data from remote coral reef islands and those densely populated by people led to some surprises.

The first discovery wasn’t surprising, however. As expected, the team found that the cover of hard coral was nearly twice that at unpopulated islands than those harboring human populations: 22.5 percent coral cover versus 12.9 percent. Moreover, the reefs of the Pacific Remote Island Areas, which have never been populated, had the highest coral cover of 30.7 percent.

Data for crustose coralline algae and macroalgae, however, proved much more variable, largely depending on local, physical conditions. In order to explain this variability, the researchers constructed relationships between the benthic organisms and physical conditions using complex statistical modeling. They found that while the physical nature of each reef—light, wave forcing, temperature, etc.—fit the data in remote reefs, they faltered when compared against data in human-dominated reefs.

“Physical drivers were linked in a predictable manner to variations in the percent cover of each of the three benthic groups (hard coral, crustose coralline algae, and macroalgae). In contrast, these same model structures performed poorly when fitted anew to populated (human impacted) islands,” the researchers write.

So, pristine reefs made ecological sense, that is, fit expectations, but the human degraded reefs didn’t. They had decoupled.

“These results suggest that there is an intimate linkage between the predictability of natural ecosystems and their state of health—more ‘healthy’ ecosystems are more predictable,” co-author Stuart Sandin, the head of Sandin Lab with Scripps, told mongabay.com.

The seeming predictability of intact ecosystems—and the unpredictability of degraded ones—could have large-scale ramifications for studying the natural world in the future, according to the scientists.

While the team depended on statistical modeling to interpret their data, Williams said one could readily tell which type of reef island—peopled or not—they were diving in. He noted that even at unpopulated islands exposed to intense wave energy, organisms were “largely still calcifying” or continuing to build reef. The same could not be said of the densely peopled islands.

Also, reefs far from people had bigger populations of some key species, like large predatory fish and sharks.

“Unpopulated coral reef islands are generally doing what they should be doing, building reefs and growing fish,” Williams confirmed.

Yet, he stressed that even among islands with dense human populations there were wide differences.

“Some of them are clearly highly degraded; they lack structural complexity and are dominated by organisms that do not build coral reefs (like fleshy seaweeds). Some, on the other hand, still possess abundant coral life and other benthic organisms that build reefs, particularly if the surrounding environmental conditions are favorable,” he said. He added, “It’s certainly not all doom and gloom.”

Still, even in human-dominated areas that sported hardworking reef builders, Williams said the numbers and relationships between species “appear altered” from those found in pristine reefs.

“Some scientists have described such systems as novel coral reef ecosystems and our observations would support such a view,” Williams noted.

Despite the importance of the unpeopled islands, there is not a single coral ecosystem today that is untouched by humans. Even the most remote reefs in the Pacific face rising pressures from climate change and ocean acidification, both driven by burning fossil fuels. Yet, Williams said there remains a silver lining for these reefs. Without local human impacts, these reefs appear to bounce back from disasters much quicker than those near human populations, a finding echoed by other research on coral reefs.

As an example, Williams points to Palmyra Atoll, a coral reef in the central Pacific, that recently suffered a coral bleaching event and two disease outbreaks linked to warmer waters.

Today, though, “the reefs at Palmyra are still thriving and boast a diverse community of calcifying benthic organisms,” said Williams, “much of the space opened up by such disturbances on the reef floor at Palmyra is rapidly recolonized by reef-builders.”

The Importance of Predictability

The first question Williams wants to answer, though, is why.

“Our goal now is to determine the mechanism behind biophysical decoupling on coral reefs,” he said. “Our current theory is that humans select for weedier reef species that are less responsive to their surrounding physical environment. This hypothesis, however, remains to be tested.”

Sandin noted that the seeming predictability of healthier, more intact ecosystems could have large-scale ramifications beyond ecology: conservationists, resource managers, and even economists may all need to take heed.

“Given that unpredictability and perceived volatility are damaging to thoughtful planning, and ultimately to rapid economic growth, the financial consequences of environmental degradation are multiplied—fewer resources in a disturbed ecosystem and more volatility,” he said. “This is a recipe for economic disaster, and is a solid reason to assure that we manage ecosystems in a manner that maintains basic health and functionality.”

While more research is certainly needed, it may be that “biophysical decoupling” could lead to decoupling within our economic systems. If this proves true—and policymakers continue to fail in safeguarding ecosystems—then all bets are off.