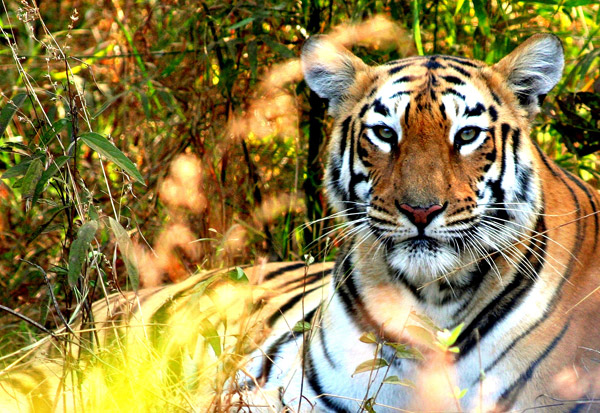 Tiger in Tadoba-Andhari Tiger Reserve in the state of Maharashtra. Photo by: Morgan Erickson-Davis.
Environment

Human Conflict Has Heavy Price on Wildlife in India

The human cost of war is horrendous. However, while most attention is focused on the suffering caused to people—and rightly so—an understudied element is the impact on wildlife conservation. This is worrying given that many of the world’s conflict zones are situated in biodiversity hotspots. To help fill that gap, a recent study in mongabay.com’s open access journal, Tropical Conservation Science looks at the Manas National Park in India, which was ravaged by armed conflict for 15 years until 2003. It found that while many species survived the conflict, three fared badly: tigers (Panthera tigris), swamp deer (Rucervus duvaucelii), and Indian rhinoceroses (Rhinoceros unicornis). It is hardly a coincidence that these animals are all highly prized by poachers. Over five months, the researchers set up 34 camera traps and 10 line transects within the central area of the park, recording the number of animals while comparing the abundance of ungulates and tigers with other protected areas in India. Knowing that prey density is the primary factor driving tiger populations, they were also able to calculate how many tigers the park could support, and whether this figure corresponded with the reality on the ground. The researchers discovered two main things. Firstly, ungulate densities in Manas National Park, such as the wild buffalo (Bubalus arnee), were similar to those in other protected areas, meaning that the park should have been able to support a tiger density of 8.2 tigers ever 100 square kilometers (39 square miles). However, they only found a density of 1.86 tigers every 100 square kilometers.
Secondly, animals such as the swamp deer and rhinoceros, which were known to have sizable populations in the park before the conflict started, had all but disappeared. In fact, the rhino had become locally extinct. Blood diamonds of a different type Rhinos and tigers are two of the animals most targeted by poachers in India, while swamp deer are sought locally for their meat and ornamental antlers. Given this, the paper’s authors suspect that the animals were poached by anti-government forces in addition to opportunistic hunters. They point to previous research that shows how economically-valuable wildlife in conflict areas are hunted by warring parties to meet conflict expenditures. To them, this explains how other animals such as ungulates were still able to survive in Manas National Park. However, the researchers suspect that their study does not reflect the full picture. They were only able to limit their analysis to an area that occupied less than one-third of the total park size due to severe limitations in protection infrastructure, park staff, funds, and functioning roads. While the space they studied is protected sufficiently, the rest of the park remains susceptible to illegal activities that harm conservation efforts. Still, they ultimately strike a hopeful note that urges a crackdown on poaching so animal numbers can fully recover. Furthermore, even if only the central area of the park is protected, they point out that animals can use it as a base to colonize other parts of the park. Peace, the researchers say, is crucial to improving the health of Manas National Park. In laying down all our guns, it seems it is not just the humans who benefit, but also the most vulnerable animals. Citations:

This article was originally written and published by Jose Hong, a contributing writer for news.mongabay.com. For the original article and more information, please click HERE.