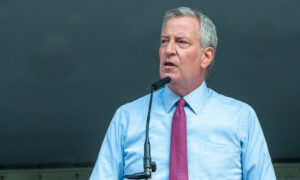 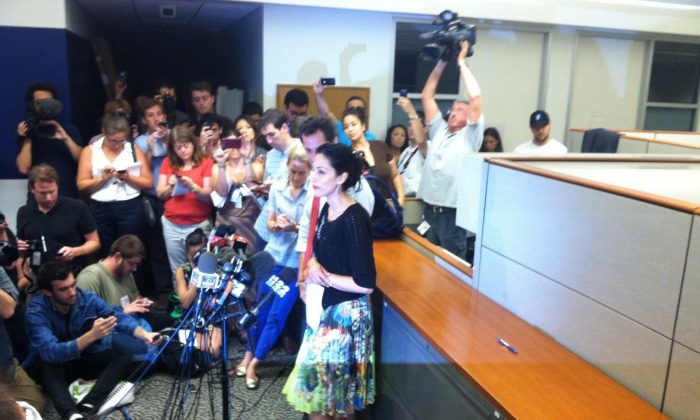 Huma Abedin, the wife of New York City mayoral candidate Anthony Weiner, at a press conference on July 23, 2013, in the Manhattan borough of New York City. She said she has forgiven Weiner over sexting incidents that happened last year, one of which came to light on July 23. (Genevieve Belmaker/Epoch Times)
New York

Huma Abedin: ‘I Love’ Anthony Weiner, ‘I have forgiven him’

Huma Abedin, Anthony Weiner’s wife, said new sexual photos that have come forward today has been painful but for the most part the episode has been put behind them.

“Anthony’s made some horrible mistakes, both before he resigned from Congress and after,” she said. “I love him … I have forgiven him … we are moving forward.”
She said that their marriage has had its ups and downs. “It took a  lot of work and a lot of therapy… it was not an easy choice in any way but I made the decision that it was worth staying in this marriage.”

“I didn’t know how it would work out, but I did know that I wanted to give it a try,” she said.

Weiner said that he has put the sexting incidents behind him and he and his wife are doing a lot better. The press conference was called after a new series of correspondence between him and a woman while he used the an online handle “Carlos Danger” came to light on July 23.

Weiner resigned as U.S. congressman in 2011 after he admitted sending sexually explicit photos of himself, or sexting, to women online. He said on Tuesday that his last time doing this was “sometime last summer.” He is currently a candidate for New York City mayor.

“People are hurting in this city. They are looking to this election for a mayor to address the issues they care about,” de Blasio said. “But the sideshows of this election have gotten in the way of this event.”