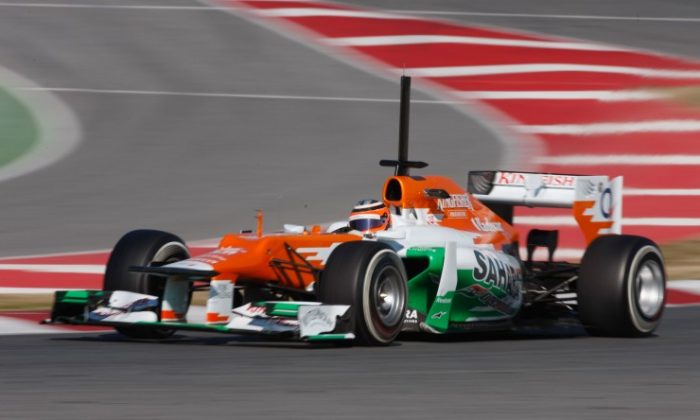 Of course, this is just testing—no one but the teams knows which cars are running to their full potential, or are testing new components or strategies.

Hulkenberg told formula1.com that he turned in a time of 1:22.608 while testing the car’s response to different tires.

“We started the day with some aero work—trying some constant speed runs and collecting more data,” explained Hulkenberg. “Then, the rest of the day was spent working on the balance of the car and trying out all four tire compounds. I did some short runs, long runs, and just got a feel for the tire characteristics and how the car reacts to them.

“Once again the car has been very drivable all day and our baseline setup has proved to be a good starting point for running all the different compounds.”

Only four hundredths of a second behind Hulkenberg with a lap of 1:22.648 came Sauber’s Sergio Perez. The Sauber only ran 85 laps because of a late-session exhaust problem.

The Swiss team was also using the session to test aero and tires, said team track engineer Giampaolo Dall’Ara: “In the morning we started with aero comparisons, and then did some proper mechanical setup work. We also carried out a full comparison of all tire compounds and ran different fuel loads.”

Vettel on the New Car

Sebastian Vettel finished third in the session. The Red Bull driver ran qualifying tests in the morning and full-race-distance runs in the afternoon, completing 104 laps and turning in a best time of 1:22.891.