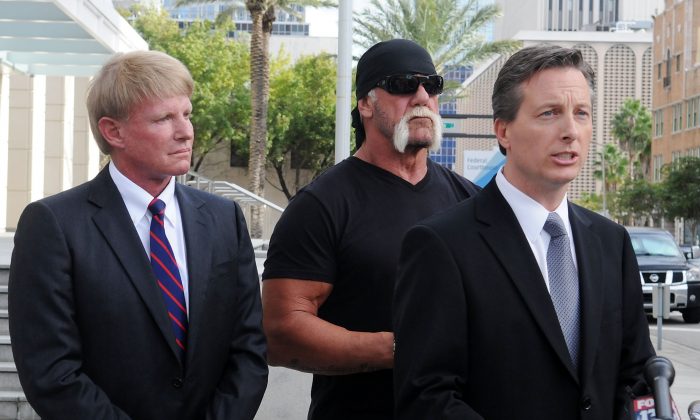 TV personality Terry Bollea aka Hulk Hogan(C) and his attorneys David Houston (L) and Charles Harder (R) attend for a press conference to discuss legal action being brought on his behalf October 15, 2012 in Tampa, Florida. One of the civil lawsuits was against Gawker Media. (Gerardo Mora/Getty Images)
Entertainment

“A Judge Told Us to Take Down Our Hulk Hogan Sex Tape Post. We Won’t,” is the headline of an article on the Gawker website.

The video is accompanied by a 1,400 “narrative” by a former Gawker editor.

Judge Pamela A.M. Campell, from Florida, issued an order for Gawker to remove the video.

“We publish all manner of stories here. Some are serious, some are frivolous, some are dumb. I am not going to make a case that the future of the Republic rises or falls on the ability of the general public to watch a video of Hulk Hogan fucking his friend’s ex-wife. But the Constitution does unambiguously accord us the right to publish true things about public figures,” writes John Cook in the article. The order to take it down “is risible and contemptuous of centuries of First Amendment jurisprudence,” he added.

Attorneys for Hulk Hogan, a former wrestler and reality television star, are pressing the judge to hold Gawker in civil contempt.

“Gawker Media argues in [the post] that it has the right to continue to publish the narrative description of Plaintiff’s private sexual activities because such discourse is protected by the First Amendment,” according to the motion. “Not only is this contention incorrect on the merits (Plaintiff established in his Motion for Temporary Injunction that Gawker Media’s post was unprotected expression), but it is well-established that even if the terms of an injunction are inconsistent with the First Amendment, a party has no right to disobey it but must challenge the injunction through legal channels.”