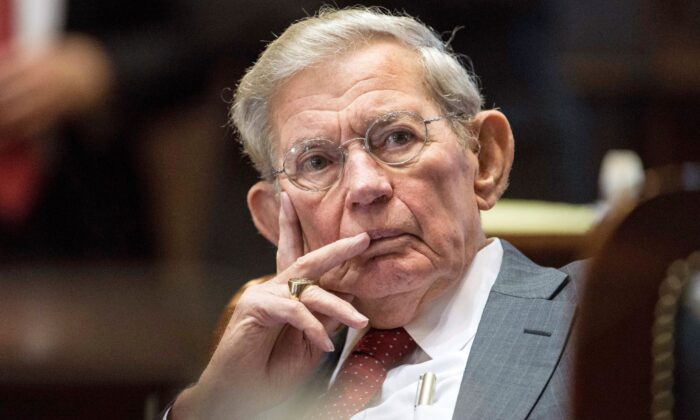 Sen. Hugh Leatherman, R-Florence, listens to a speaker during the first day of legislative session at the South Carolina Statehouse in Columbia, S.C., on Jan. 10, 2017. (Sean Rayford/AP Photo)
Congress

Leatherman died at his home in Florence, his office said, after being diagnosed with an inoperable cancer.

As he entered hospice care last month, Leatherman’s staff began notifying lawmakers that the nonagenarian Republican had been hospitalized with severe abdominal pain, and that doctors discovered the cancer while removing parts of his intestine.

“Ever the stubborn optimist,” Leatherman continued to work, drafting legislation, and receiving budget briefings for the upcoming legislative session, according to a family statement.

“While his passing brings us great sorrow, we take solace and joy knowing that up until his last days, he was active in the Florence community, and continued serving the people of Florence and South Carolina,” they wrote.

Leatherman was in his 11th term and among the longest-serving lawmakers in South Carolina’s Legislature. First elected to the Senate in 1980 as a Democrat, he later ran unsuccessfully for governor before switching parties in the 1990s, one of a number of lawmakers who did so as Republicans gained dozens of seats in Congress.

Leatherman soon assumed the chairmanship of the Senate Finance Committee, and in a state where the governor has less control, Leatherman was long considered South Carolina’s most powerful politician for his dominance over the state budget.

Leatherman also sat on a number of fiscal oversight boards, including the State Fiscal Accountability Authority and the Joint Bond Review Committee. A new port terminal in Charleston bears his name.

Leatherman played a key role in building up the state’s business economy, including backing a massive tax incentive package that helped lure Boeing to the state. For years, the longtime lawmaker fielded criticism for how much state funding was directed toward his home district, as well as millions in state contracts given to the concrete company he founded, and from which he continued to draw a salary.

Never shy to skirmish with those in his own party, Leatherman had contentious relationships with Republican governors and others seeking to rise in the GOP.

When Gov. Mark Sanford in 2009 threatened to reject hundreds of millions of dollars in federal stimulus money, or use it to pay down state debt, Leatherman wrote that he hoped the governor “will understand the seriousness of the damage to our people if we don’t get that money” and called the debt substitution request “foolish.”

In 2016, Gov. Nikki Haley actively campaigned against Leatherman, endorsing his GOP primary opponent and saying “there is not a tax that he hasn’t tried to raise.”

Two years later, he became a frequent target for GOP gubernatorial contender John Warren, who criticized Leatherman as not being conservative enough for the state. In a runoff debate against Gov. Henry McMaster—whom Leatherman ultimately endorsed—Warren referred to the longtime lawmaker as among the “rotten apples” he would work to root out of the Legislature if elected.

For a time, Leatherman presided over his chamber as Senate president pro tempore. Some fellow Republicans, including Sen. Shane Massey, said that role combined with Leatherman’s committee leadership posts put “way too much power” in the hands of a single lawmaker.

Leatherman briefly stepped away from that position in 2017 when then-Lt. Gov. McMaster was elevated to the governorship following Haley’s departure to join the Trump administration.

As Senate leader, Leatherman would have been next in line to assume the state’s No. 2 position, according to the state constitution. But, opting not to take on what then was a largely ceremonial role, he stepped down from the post, allowing another lawmaker to become lieutenant governor before reassuming the president pro tem slot a day later.

Massey called the move “a shameless and obvious game of musical chairs.”

After a 2018 rule change meant that a lawmaker couldn’t lead the chamber and also chair a committee, Leatherman opted to keep his Finance chairmanship rather than seek the new post of Senate president, setting down the presiding gavel for good.

“This state is steeped in tradition,” he said in 2019, reflecting on the continuity of the chamber in which he had sat for more than four decades. “We don’t change often.”