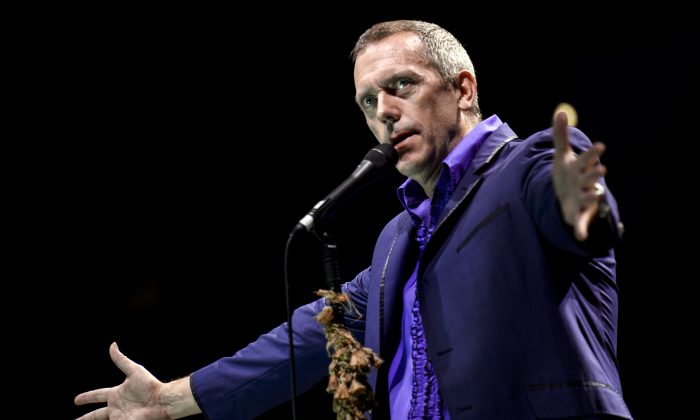 British singer and actor Hugh Laurie, performs on stage with his band, on July 12, 2012, during the 'Jazz A Vienne' music festival in Vienne, center France. (Jeff Pachoud/AFP/GettyImages)
Entertainment

Colbert didn't know Laurie, whose last album sold 1M copies, could 'so much as whistle'
By Tara MacIsaac

Hugh Laurie, who played Dr. Gregory House for eight seasons on Fox’s “House,” appeared on the Colbert Report with Stephen Colbert on Monday night. He introduced his new blues album “Didn’t it Rain,” amid comedic banter about a British guy succeeding in an African American genre, and about an actor paid nearly $400,000 an episode living the blues.

“America,” he answered his own question.

Laurie’s previous blues album, “Let Them Talk,” sold a million copies, going triple platinum—and, said Colbert, “I didn’t know you could so much as whistle.”

Colbert described the album cover, on which Laurie is playing a very tiny piano, as “adorable.”

“Do you have to live the blues to play the blues?” Colbert asked.

Laurie’s simple answer was, “No.” He admitted he was “handsomely compensated,” for his role on “House.”

Although he was reportedly unhappy in the role. He told Radio Times his success became a “gilded cage.”