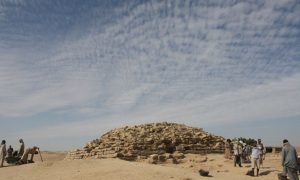 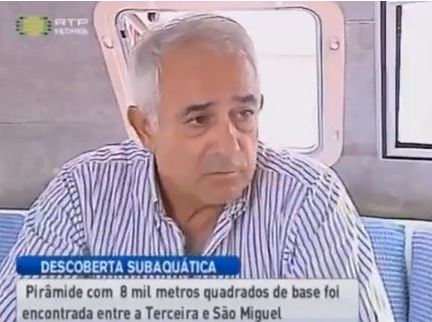 Reports about a huge underwater pyramid being found near Portugal off the coast of Terciera in the Azores archipelago are still going viral months after the discovery was first announced.

The “subaquatic pyramidal structure” was first announced in English by the Portuguese American Journal in September 2013.

It reported that the structure was sighted by a private yacht owner at a depth of 40 meters, and that it was estimated to be about 60 meters high. Its base was measured at 8,000 square meters, which would be bigger than a football field.

“The pyramid is perfectly shaped and apparently oriented by the cardinal points,” Diocleciano Silva, the owner, told Diário Insular, the local newspaper.

Archeologists from the Portuguese Association of Archaeological Research found evidence of other rock structures in the area that they believe supports the belief that humans arrived in the Azores thousands of years before the Portuguese.

The structures may have been built according to a plan because they’re aligned with the summer solstices.

The Portuguese found the Azorean archipelago uninhabited around 1427.

Among other evidence found includes an epigraph from Roman times, Carthaginian sanctuaries, and cave art.

Alternative news sources say that American media outlets have been suppressing the discovery and that NOAA has known about the pyramids for a while. The discoveries have been promoted by these sources as possibly being linked to Atlantis, a kingdom that is purported to have existed many years ago but has never been found.

Silva himself believes this to be the case.

“It’s amazing because it forms a perfect pyramid. And moreover, orientation, deployment of the pyramid: the vertices are oriented north and south, just north and south, such as the Giza pyramids in Egypt,” he told Portuguese news website Terra.

The Portuguese Navy is helping investigate the findings.

Admiral Fernando Pires, commander of the Maritime Zone of Azores, said that it’s too early to know definitively what the structures are or where they came from.