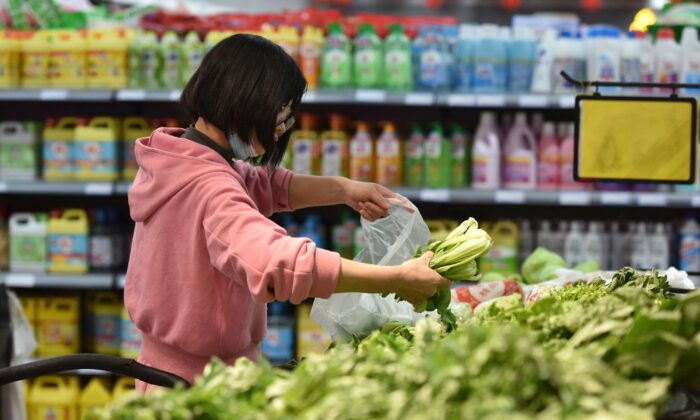 A customer shops for vegetables at a supermarket in Fuyang in China's eastern Anhui Province on March 9, 2022. (STR/AFP via Getty Images)
China Business & Economy

In the face of an economic slump, China’s State Council emphasized that it would continue the strategy of expanding domestic consumption in its 2022 work report released on March 5. However, boosting the economy by pushing the Chinese people to consume more is likely unattainable for the Communist regime, according to professional analysis.

Official figures show that China’s consumption growth in 2021 was lower than in 2019 before the outbreak of COVID-19. Especially sluggish are household consumption, and a negative growth in tourism, accommodation, and movie box office revenues compared to 2019.

On May 28, 2020, Chinese Premier Li Keqiang said in a press conference that China has 600 million people with low and middle incomes and that their average monthly income is only about 1,000 yuan ($158).

“Hard to imagine how consumer confidence could be supported by a monthly income of $158.” Jiang said, adding that “lying flat culture” that has become popular in recent years is a graphic reflection of the lack of consumer confidence.

“Lying flat” is a popular internet term from 2021, roughly referring to many Chinese young people who are disappointed with an economic downturn and social pressure, whose specific slogans include “no house, no car, no marriage, no baby, no expenses,” and “maintaining a minimum standard of living.”

In 2021, both income and consumption growth were lower than in 2018 and 2019, the years before the pandemic outbreak, with an overall downward trend in the growth of consumer goods’ total retail sales.

Therefore, more Chinese people are choosing savings over consumption and investment, according to a questionnaire survey of urban savers in the fourth quarter of 2021 by The People’s Bank of China that was released on Dec. 31, 2021.

China’s macro leverage ratio, the percentage of total debts (debts over households, non-financial enterprises, and governments) to Gross Domestic Product (GDP),  fell to 270.1 percent in 2021, a drop of 6.3 percentage points over the year prior, according to a February report by China’s National Institution for Finance & Development (NIFD).

Among which, the household sectors amounted to 62.2 percent in 2021, from less than 5 percent in 2000 the official data shows.

However, the stats only calculate total debts to financial institutions and do not take into account private borrowing, which is a growing form of credit for a large number of Chinese families, especially those in rural areas who fail to borrow from banks, said state-run Dagong Global Credit Rating in 2018.

The Suning Institute of Finance shared a similar view in an August 2019 article that counted disposable income rather than GDP as the denominator, yielding a household debt to disposable income ratio of 111.2 percent in 2017, which exceeded the United States at 102.5 percent and Germany at 85.4 percent.

In China, a main crisis in the household sector comes from real estate, as it stands at about one-third of residents’ assets, and it is also used as primary collateral for other loans, according to the NIFD report.

About one quarter of Chinese households are burdened with home loans that are 32 times their annual income. Based on the average interest rate of 5.6 percent for a home loan in 2021, these households would pay almost twice as much in interest each year as their entire annual household income, making it impossible for them to repay the debt on their own, according to the NIFD report.

Soaring home prices in China also result in buying a house needing money from “six purses,” a theory proposed in 2018 by Fan Gang, a member of China’s Central Monetary Policy Committee, which means six family members, including parents and grandparents, have to subsidize a young couple’s home purchase, which unavoidably impacts the retirement income of the graying.

Li Yang, director of the NIFD, highlighted China’s employment crisis in a December 2021 internet speech, disclosing an unemployment rate of more than 20 percent for people aged 20 to 24 with a college education and above.

The high proportion of such educated but partially employed young people exacerbates how difficult it is for families to “expand consumption,” Li said.

In addition, the CCP crackdown on certain industries and its extreme zero-tolerance Covid policy has worsened the unemployment crisis. In 2021, there are more Chinese companies in the real estate, internet services, education and training, tourism, accommodation, and catering industries shedding employees or reducing salaries than in previous years.