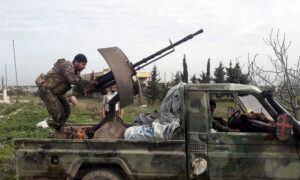 BEIRUT— The official Syrian news agency and activists are reporting a huge explosion in the northeastern town of Qamishli near the Turkish border.

The agency says Sunday’s attack was carried out by a suicide bomber who targeted a hotel in the predominantly Kurdish town, but the Britain-based Syrian Observatory for Human rights said the attack took place at a base next door belonging to local Kurdish security forces.

It was not clear if the attack was carried out by a suicide bomber, added the observatory, which relies on information from a network of activists across Syria.

The agency said one person was killed and three wounded. The observatory offered no details on casualties.