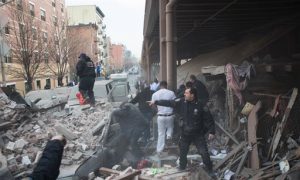 Harlem Explosion and Fire: Photos and Videos From the Gas Explosion in NYC
0 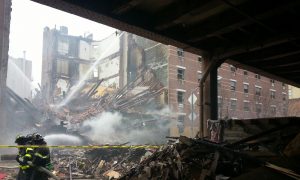 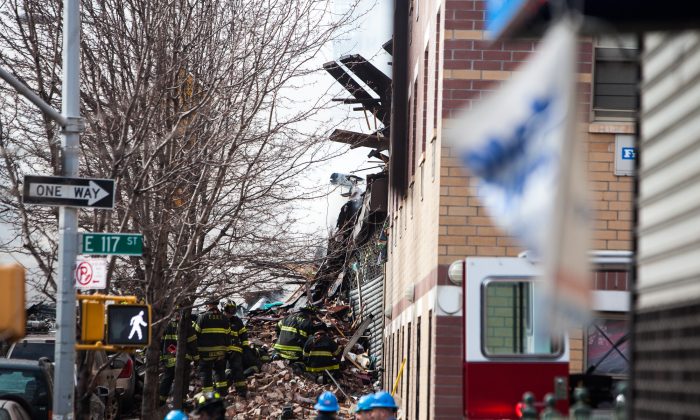 New York officials say an eighth victim has been pulled from the rubble of a gas explosion that destroyed two buildings in East Harlem.

The widow of a man killed when two buildings exploded in New York City’s East Harlem neighborhood says her husband, Andreas Panagopoulos, “was the smartest person” and “so special.”

Police have identified 22-year-old Rosaura Hernandez as one of the victims of Wednesday’s blast.

Hernandez worked at Triomphe Restaurant in the Iroquois Hotel.

Four victims have been identified so far: Griselde Camacho, 45, a Hunter College security officer; Carmen Tanco, 67, a dental hygienist who took part in church-sponsored medical missions to Africa and the Caribbean; Andreas Panagopoulos, a musician; and Rosaura Hernandez, 22, of Mexico.

Mexican officials said another Mexican woman, Rosaura Barrios Vazquez, 43, was among the dead.

From our staff reporter Petr Svab on site:

The staff at the Red Cross shelter have been very kind, says Narisol Gonzalez, 49, who lives in the adjacent building to the site, and who has been displaced because of the collapse.

National Transportation Safety Board has ruled the incident a gas explosion.

Crowd of about 100 at the one-stop-shop the City set up to help anyone in relation to the East Harlem explosion today.

Last night the American Red Cross, in cooperation with the Salvation Army, opened a shelter at the Salvation Army facility at 175 East 125th Street and 3rd Avenue in Manhattan. The Center is on the second floor.

Many of the 69 who sought shelter last night left for work or school, but Red Cross workers have been told they should expect more needing shelter at the same location tonight.

Red Cross will continue to provide aid to those who have been in contact with case workers.

FDNY members are now working in freezing conditions with high wind. More than 150 firefighters were on scene this morning.

Mayor Bill de Blasio, Fire Commissioner Sal Cassano, Council Speaker Melissa Mark-Viverito and other officials hold a press briefing of all the latest updates on the buildings collapse. According to the Mayor the reason for the explosion is still unknown.

Fire Commissioner Sal Cassano said the FDNY will look into the main reason for the explosion, but first they need to find all the missing people. “Mainly we have to get rid of the debris first,” he said.

See article here, and check back for the latest updates.

The number of those perished in the buildings collapse was updated to 7.

Mayor Bill de Blasio visited the site in the morning.

The Absolute Piano store, which was one of the two buildings collapsed posted on their webpage the following notice.

“Due to a fire we are closed. Our hearts go out to all those affected by the event. We thank all the first responders for assisting in this unfortunate incident.”

NTSB Board Member Robert Sumwalt held a press briefing at the site. The National Transportation Safety Board released a statement about its launch of a go-team to investigate a gas explosion and fire in New York City. Sumwalt said the investigation can take anywhere up to 12 months.

Pipeline Investigator Ravi Chhatre is leading the team as investigator-in-charge. Board Member Robert L. Sumwalt is accompanying the team and will serve as the principal spokesman during the on-scene phase of the investigation.

“Our whole objective of being here is to make recommendations to make sure something like this never happens again,” Sumwalt said. The NTSB will be looking into all reports, including all ConEd’s call logs to determine if there had been any reports of potential gas leaks.

The authorities have also issued a new set of recommendations and instructions for people looking to report a potential gas leak. Read the report here.

Video of #FDNY members as they operate inside the 5-alarm fire and collapse in #Manhattan today. #EastHarlemExplosion http://t.co/QobcVjpNyF

Our on-site reporter Genevieve Belmaker says that people are getting displaced and many have been told to find an alternate shelter for the night. People like Deborah Martinez who was standing outside in a sweatshirt said: “I’m not going to the shelter, I have a 78-year-old grandmother and a 5-year-old daughter, my coats are inside,” she said.

Martinez lives at 54 East 115th Street, just steps away from the building collapse. Her neighbor from the same building who was forced out of the building along with her two daughters will also have to find another place to sleep tonight.

The Red Cross have set up an emergency center at PS57 on 115th St. between 3rd & Lex., where all those who are displaced are welcomed, and provided with food and water.

FDNY provided a photo from the scene of the 5-alarm fire and collapse in #Manhattan.

Now: #FDNY at the scene of the 5-alarm fire and collapse in #Manhattan. pic.twitter.com/GxkaNLzqqq

According to FDNY there are: 2 fatalities, 2 serious/life-threatening, 5 serious/non-life threatening, 15 minor.

The National Transportation Safety Board said it is sending a team of experts to investigate an explosion and building collapse.

The safety board investigates pipeline accidents as well as accidents involving all modes of transportation.

Our staff reporter Petr Svab provided photos from the scene. See above.

NYC Mayor’s Office tweeted: @RedCross has set up a center with food and water at PS 157: 176 East 115th St. between 3rd & Lex. #eastharlemexplosion

Mayor Bill de Blasio spoke during a press briefing at the site of the two explosions in East Harlem.

“The explosion was based on a gas leak,” the mayor said, noting that the explosion had a very heavy impact on the surrounding buildings.  For him, the saddest part was that there was no warning in advance. The only indication of danger came in at 9:13 a.m. when someone called in to ConEdison to report the smell of gas at 1652 Park Ave., an adjacent building. ConEdison arrived just after the explosion.

“We have a lot of people who are deeply concerned,” the mayor said. Any relatives looking for information, there will be a special hotline set up, but for now they can call 311.

Salvatore “Sal” Cassano, the New York City Fire Department commissioner, said the call came in at 9:31 a.m. There were fire trucks on site at 9:33 a.m.

“We have to clean the sidewalk of the debris, to make sure there was no one on the sidewalk,” Cassano said. “The building is in a very precarious position,” he said. There are 255 firefighters and dozens of special equipment necessary to remove rubble and clear the area.

There are a reported 17 people injured and 2 people dead. Press on the scene await an update from the mayor.

The building at 1646 Park Ave. has an open violation since 1998 for “several vertical cracks” on the rear wall “which is hazardous for the safety of the structure,” according to Department of Buildings records.

During an interview with a CBS radio station, a local worker, Aryana said that the two buildings, which are located right behind her business exploded at exactly 9:30 a.m.

“I know because I was leaving for an appointment … it was like an earthquake, our ceiling collapsed,” she told the radio station. “It kept falling, that’s why we kept running … I thought that it was a bomb,” she said.

Her co-worker, who opened her business in the morning, said that she smelled gas around 8:30 a.m.

One person has been reported dead. Four people are still unaccounted for.

According to twitter: #ConEdison was responding to a report of a gas odor in the area just before the explosion occurred.

There are a reported 16 injuries with 1 being severe, according to 1010WINS. Some people are still unaccounted for.

Mayor Bill de Blasio is said to be on his way to the scene.

Eleven injuries, have been reported one of them serious, according to 1010 WINS. People are trapped in the rubble, the Times reports.

The explosion took down two five-story buildings at 1644 and 1646 Park Ave. near the Metro-North tracks. One building housed a church; the other housed a piano store. Both buildings had residential units.

Metr0-North service has been suspended.

“It was just crazy. There were people crying. It’s like a total warzone out there,” a resident told 1010WINS.

Twitter users are posting photos of the explosion near the Metro-North tracks at East 116th Street in Harlem.

Witnesses on the scene report an explosion and a total building collapse.

“There was a loud boom,” a caller to the Brian Lehrer radio show who lives at 152nd street, nearly 40 blocks away, reported. “The whole building shook.”

The windows of adjacent buildings were also blown out, reported another caller. Evacuated residents from nearby buildings reported a ground-shacking explosion.

The Fire Department says that 168 firefighters are on the scene, 1010WINS reports.

Smoke from the explosion can be seen from miles away.

This is a developing story, check back for details.

Here is how the two buildings looked like before the explosion http://t.co/xisZ2oJsZH via Google Streetview. pic.twitter.com/MrpwjVIao6