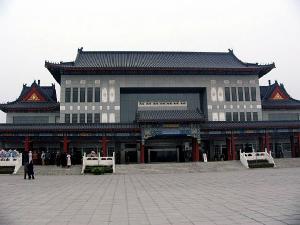 The memorial service for the former Chinese Communist Party General Secretary Zhao Ziyang is being held at this moment in Babaoshan Revolutionary Cemetery. According to a report by the Chinese-language version of The Epoch Times , informed sources inside China confirmed that at 9 a.m. Beijing time on January 29, a crowd of about several thousand people was gathering in front of the main gate to the Babaoshan Revolutionary Cemetery.

The sources said a great number of college students were confined in the subway and prevented from joining the group. Several hundred police and an unknown number of plainclothes police were trying to drive the public away from the approaches to the cemetery. Photographers from dozens of domestic and foreign television stations were also driven away. Police occasionally clashed with the masses.

At 9 a.m., the mourners and the reporters were being constantly pushed back to more than 50 meters from the gate. One reporter who was preparing to take photos of the scene was encircled by more than 20 policemen and asked to produce his identification.

In front of the main gate of the cemetery, reporters from The New York Times , The Los Angeles Times , The Washington Post and others gathered. At 9:05, a foreign reporter’s camera was seized by police and he was forced outside the crowd. At 9:12, the crowd was in a bit of turmoil as police were driving a British photographer away; some foreign reporters were beaten by police. Some other foreign reporters were working on laptops and speaking into microphones for live coverage. At 9:15, two additional truckloads of police arrived. More and more people were driven to the outside of the crowd. Police took away posters with images of Zhao displayed by mourners. Some foreign reporters were able to photograph the scene. At 9:35, a mourner said that people were pushed more than 300 meters from the main gate.

The crowd continued to grow as the memorial service continued.