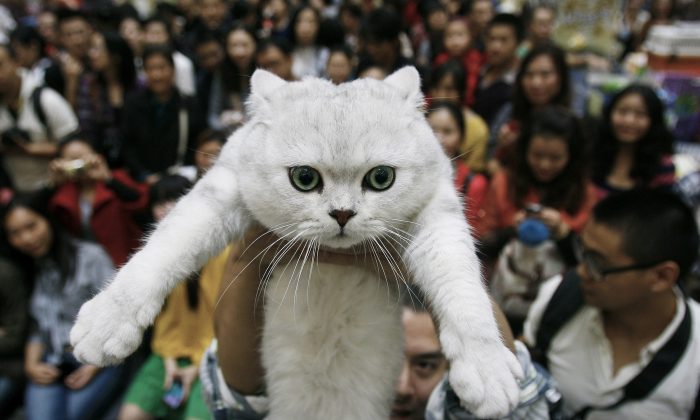 In this Saturday, Oct. 22, 2011 file photo, a man holds up his pet cat during a cat show in Wuhan in central China's Hubei province. In a report released Monday, Dec. 16, 2013 by the Proceedings of the National Academy of Science, scientists say they've caught cats in the act of going through a key stage in domestication, with the evidence in 5,300-year-old bones from China. The Chinese animals are not the ancestors of today's housecats, whose family tree reaches back to domestication in the Near East instead. But the work gives support for the leading theory of just how wild animals took the first steps toward becoming our familiar pets. (AP Photo, File)
Social Media

A number of people were talking about “International Hug Your Cat Day” on Wednesday.

It’s unclear how the day got started, but a users on Twitter were going with it.

“Hug Your Cat Day is one of those pleasingly straightforward holidays. Quite simply, it is a day in which cat owners everywhere are encouraged to hug their cats. The more dedicated amongst them will not need this encouragement, of course, but it is always good to be reminded of our feline friends,” writes Daysoftheyear.com, a website dedicated to a number of days.

It adds: “So, whether or not you are the proud housemate of a purring kitty, Hug Your Cat Day is the perfect excuse to put a bit of warmth and companionship into your life. No matter what’s going on around you, no matter how bad or troubling things get, you can always count on your furry friend to be there for you.”

It is thought that the ancient Egyptians were the first people to have domesticated cats, as there were cult animals back then.

In other places, there might have been instances of domesticated cats as far back as 12,000 years ago, according to Smithsonian Magazine in 2007. “We think what happened is that the cats sort of domesticated themselves,” Carlos Driscoll, one the authors of a study in 2007, was quoted as saying.

But the Egyptians were quite fond of the animal.

Smithsonian wrote: “The ancient Egyptian reverence for cats is well-known—and well-documented in the archaeological record: scientists found a cat cemetery in Beni-Hassan brimming with 300,000 cat mummies. Bastet, an Egyptian goddess of love, had the head of a cat, and to be convicted of killing a cat in Egypt often meant a death sentence for the offender.”