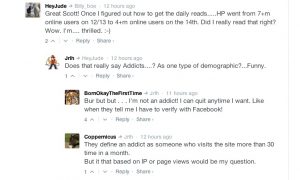 The Epoch Times articles have gotten over 20,000 comments from former users of HuffPost, with many saying they were unpleasantly surprised by the sudden change. On December 10, users signed in only to find the new verification system in place. Previously, Jimmy Soni, managing editor of the Huffington Post Media Group, told users in an August blog post that they would be grandfathered in, meaning they wouldn’t be impacted by the switch.

Many users said that verification only through Facebook prompted them to leave. A larger reason many are upset was not being informed that Huffington Post management reversed the decision announced by Soni.

Epoch Times conducted an email interview with Tim McDonald, director of community at HuffPost, asking questions about the new verification system. Requests for a phone interview were declined.

A: This was a company decision to improve the overall quality of conversations at The Huffington Post by improving the integrity of fellow community members and reducing the number of trolls and users with multiple accounts, thereby improving the ability to engage in meaningful discussions.

Q: Why was Facebook chosen as the only tool of authentication? Did Huffington Post and Facebook enter a business relationship? If so, what was the nature of that relationship?

A: There is no business relationship between Facebook and The Huffington Post in regards to this decision. Facebook was chosen because they are the only open authentication service that provides verification. We are actively exploring other options to authenticate.

Q:  In August, Jimmy Soni announced the end of anonymous comments on the site. He said: “The change will only affect users creating new accounts on HuffPost. Existing accounts will be grandfathered into the new system.” However, the new verification policy now affects all users.

What was the reasoning behind Huffington Post’s decision to change these terms without letting users know?

A: When Jimmy Soni announced the change affecting new accounts, it was in regards with authenticating with Facebook. When we realized the next step of requiring real names would require authentication, this would have to be done for all users, both existing and new. All users were notified when they logged into their HuffPost account on Dec. 10 about the change.

A: Our active daily commenters fluctuates daily and it will be at least a month before we begin to even see any patterns this change may have. Any users who decided to deactivate their accounts are welcome back and we are continuing to see new user signups grow.

Q. A significant number of commenters on Epoch Times articles–and your post on Huffington Post–who identify themselves as longtime users of HP are saying that comments expressing displeasure with the new policy have been deleted by HP moderators in a more heavy-handed way than they’re used to. Can you comment on this?

A: Our moderation process has evolved over the last several years, but we have given great latitude to those expressing displeasure with the recent change. All comments on The Huffington Post must meet our community guidelines.

Q: The commenters on Epoch Times articles have described themselves as many of HP’s most dedicated users: “Best thinkers and most thoughtful and articulate people that have been posting on HP since 2005, 2006, 2007, and 2008 from the very beginning,” according to one user. Many say they’ve made thousands of posts, had thousands of followers, and have always followed HP’s rules. They express feeling betrayed, unvalued, and discarded by HP in the process of this change. Can you comment on this?

A: The move toward real name and verified identity commenting was made with the intent on improving the overall health of the community. All commenters, especially those who have been with us for years and contributing positively, are valued at HuffPost. Our community has been at the center of what The Huffington Post is about.

Q: Also, please feel free to add anything that you feel we should’ve asked about, and that people may be missing in the conversation about the new comment system.

A: Although our new “conversations” comment format is fairly new, this change was not to our comment system, just the process in which users authenticate their accounts to have the ability to comment on The Huffington Post.