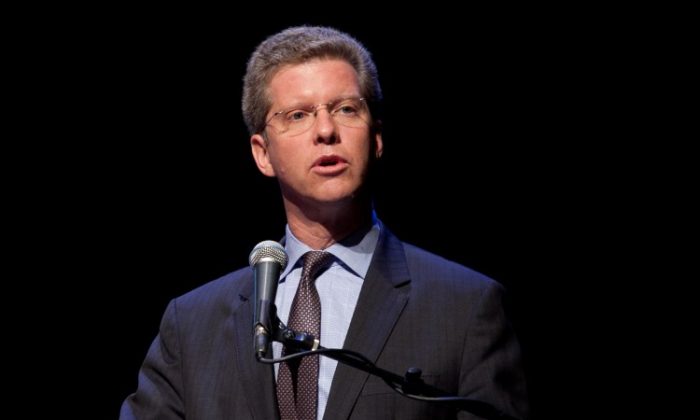 NEW YORK—Nearly seven weeks have passed since Superstorm Sandy devastated much of New York City’s coastal areas. As recovery has become a less demanding task, both city and federal officials are beginning to put together the pieces to a comprehensive long-term rebuilding plan that will help prevent catastrophic storm damage in the future.

Both federal and local officials met in Lower Manhattan Thursday to discuss the framework of how the daunting task of rebuilding is shaping up. As with much of the rebuilding discussions to this point, government officials continued to be short on specifics but long on goals as they continue to outline a comprehensive multiagency plan.

The panel opened with Housing and Urban Development Secretary Shaun Donovan, whom President Barack Obama tapped to chair the Hurricane Sandy Rebuilding Task Force on Dec. 7. Donovan will be the main go-between for federal, state, and local officials as they work together to effectively use federal aid.

“There is no time when they (citizens) are more vulnerable to despair and disillusionment about the federal government’s role, or any government’s role, if we fail,” Donovan said regarding rebuilding. “It is incumbent on me, and all my colleagues at the federal level, to make sure that this investment is wisely, carefully, done and that we do not waste these precious resources.”

He set a goal of six months for delivery of a comprehensive rebuilding plan for the region, including ways to monitor progress and strengthen accountability to ensure money is not wasted.

Donovan took the opportunity to urge passage of the $60.4 billion aid bill, which is sitting in Congress, before the end of the year. “There are hundreds of thousands of people, families, businesses, who literally cannot get on with planning their lives and futures until Congress acts,” Donovan said.

Many local residents in attendance, both online and in person, asked questions related to issues specific to their neighborhoods and needs—public housing, getting businesses back up, and infrastructure. The questions were indicative of a public who has grown impatient of talk and continue to look for answers.

Robert Steel, New York City deputy mayor for economic development, fielded a question, saying: “I am not going to ask Seth Pinsky to take a job and then give the answer before he does his work. That is what the next few months are about and we will come back to you. I promise to do our very best to put in priorities, costs, and making recommendations.”

On Dec. 6 Mayor Michael Bloomberg gave Pinsky, who is the president of the city’s Economic Development Corporation, until February to develop a concrete recovery plan, which is to include preparations for climate change.

Steel reinforced what Mayor Bloomberg has repeatedly said—rebuilding plans would not involve a retreat from the waterfront.

While Steel will leave the specifics up to Pinsky and his team to decide, the deputy mayor assured everyone decisions would be made with public outreach. “It is not going to just be us talking to ourselves,” Steel said.

Specific details for rebuilding are still in the planning and idea stages, but one thing is certain—whatever the approved plan is, it must revolve around a sustainability model. Multiple panelists pointed out that
Hurricane Sandy was not actually a hurricane—it was a tropical storm.

With weather patterns expected to become more severe and sea levels to rise, preparing for the new normal, and not just rebuilding the same things, in the same places, will be at the forefront of rebuilding planning.

The rebuilding task force is not just looking for ideas stateside, but to other countries that are also dealing with these issues.

Jos van Alphen, a special adviser to the Netherlands Delta Commission, gave a presentation outlining how the Netherlands, a country that has become a leader in water mitigation, has dealt with storms and increased water levels.

Alphen showed how some of the newer mitigating infrastructure was more environmentally conscious and in some cases more effective. Alphen discussed green, or “soft” infrastructure, which includes adding wetlands, marshes, oyster beds, and green space to help absorb the water.

Alphen warned that, while the projects were effective, they often took four to five decades from inception to completion. “That is the time frame you should have in mind when you talk about these preparations and plans,” Alphen advised.

With less than a year before the start of the next hurricane season, time is a precious commodity.

“We met with some folks from the Army Corps of Engineers yesterday and they are terrified,” said panelist Dale Morris, senior economist at the Netherlands Embassy who has worked with the Dutch on suitability design.

“They are terrified of the exposed coast line that New Jersey and Long Island has right now. If a storm were to come next year that would have any decent size of surge associated with it, the devastation will be much more,” Morris said.

The Epoch Times reached out to the Army Corps of Engineers to confirm its sentiments, however, they did not respond by press time.