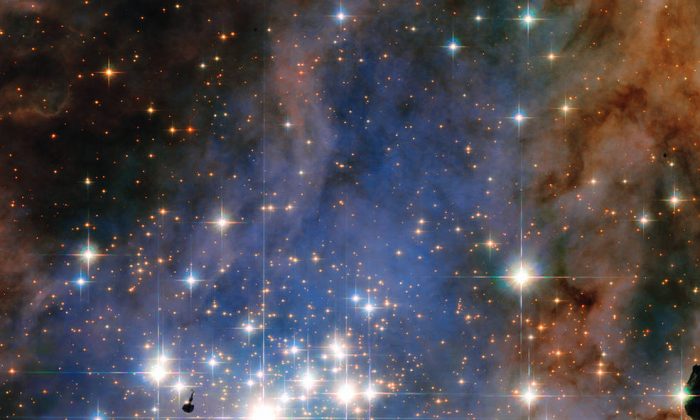 Resembling an opulent diamond tapestry, this image from NASA’s Hubble Space Telescope shows a glittering star cluster that contains a collection of some of the brightest stars seen in our Milky Way galaxy. (NASA, ESA, and J. Maíz Apellániz)
Science

These stars shine like bright diamonds in the sky.

The image above shows the Trumpler 14 star cluster, located some 8,000 light-years away, captured by the Hubble Space Telescope from 2005 to 2006.

The cluster is one of the brightest collections of stars in the Milky Way. These stars, nestled in the Carina Nebula, are burning so quickly that they’ll explode as supernovas in just a few million years. For comparison, the Sun has a lifespan of around 10 billion years.

The Trumpler cluster is only half a million years old, very young in star-formation years, which explains why it is one of the most luminous concentration of stars in the Milky Way. As the cluster ages, it will invariably darken.

“The combination of outflowing stellar ‘winds’ and, ultimately, supernova blast waves will carve out cavities in nearby clouds of gas and dust,” a statement from NASA reads. “These fireworks will kick-start the beginning of a new generation of stars in an ongoing cycle of star birth and death.”

The composite photo used data that filtered blue, visible, and infrared lights as well as hydrogen and nitrogen emission from glowing gas that surrounded the star cluster.