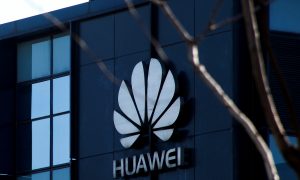 A visitor walks past the logo of Chinese telecom giant Huawei at the Hanover Messe technology fair on April 1, 2019, in Hanover Germany. (John MacDougall/AFP/Getty Images)
Canada

Huawei’s Use of Political Insiders for Lobbying Could Be a Concern, Experts Warn

Huawei’s targeting of political insiders for its lobbying efforts raises ethical questions if it leads to undue influence on policy-making, experts say, with some noting it could be a case of helping an adversary given the telecom giant’s links to the Chinese regime.

Huawei has recently ramped up its lobbying efforts in Canada as Ottawa finalizes its decision on whether to allow the Chinese telecom giant to be part of its 5G network, and as Canada continues court proceedings for the extradition of the company’s CFO Meng Wanzhou to the United States.

The push is similar to the company’s approach during the U.S. House Intelligence Committee’s probe into Chinese phone-equipment makers in 2011–2012, where it increased its lobbying budget by over four times. The committee eventually found that Huawei and the other Chinese telecom giant ZTE posed a national security threat to the United States, saying they are arms of the Chinese regime and have stolen intellectual property from American companies, and could spy on them.

Huawei also launched a heightened lobbying effort in Australia to persuade officials not to exclude it from the country’s 5G networks. Even though Australia eventually banned Huawei and ZTE from 5G networks last year, Huawei has maintained its lobbying in hopes of a reversal of the ban, with Chinese officials expressing optimism that the new Australian government that took power after the ban has a more “positive attitude” toward China, according to the Telecoms publication.

In the United Kingdom, where, like Canada, the government has so far not ruled out Huawei from its 5G network, the company has spent at least 140,000 pounds (about C$242,000) on hospitality for legislators and political donations and has held over 30 meetings with cabinet ministers and Prime Minister Theresa May, according to The Times. May recently fired her defence minister Gavin Williamson for leaking the news that the U.K. is going to allow Huawei to supply equipment for its 5G network, an allegation Williamson denies.

Among the executives Huawei has recruited in Canada are Jake Enwright , a former spokesperson for Conservative Leader Andrew Scheer, and Alykhan Velshi, an aid to former prime minister Stephen Harper. The company previously employed Scott Bradley, a former Liberal party candidate and well-connected party insider, as its vice president for corporate affairs. Bradley left his post in January, shortly after the start of the diplomatic row between Canada and China over Meng’s arrest.

According to a report by The Globe and Mail, Huawei has hired a number of lobbyists in Canada who used to work for former Liberal or Conservative governments or for major Canadian businesses. Among them are former speech writers, aids, and campaign workers for former prime ministers and provincial party leaders.

In Europe, Huawei has recruited Dick Roche, former Irish minister for Europe, to lobby lawmakers on its behalf. And among the U.S. team of lobbyists for the company are former congress members and, most recently, a former senior director of the National Security Council.

J. Michael Cole, a Taipei-based senior fellow with the Macdonald-Laurier Institute in Ottawa and a former analyst with the Canadian Security Intelligence Service, says Huawei’s lobbying efforts in Canada are part of a multifaceted strategy to rehabilitate its image. It’s a strategy that involves relying on connected political figures to repair its reputation as well as spending money to bring the company’s logo inside millions of homes by sponsoring Hockey Night in Canada.

Huawei hopes to “tap into whatever lingering influence these political figures may have in hopes of persuading the current government—or future one, after October—to change its policy and release Meng,” Cole says.

“This certainly raises ethical questions, especially if those relationships were to translate into undue influence on Canadian policy in a way that is detrimental to the national interest.”

U.S. President Donald Trump recently blasted the appointment of Samir Jain, a former National Security Council senior director with the Obama administration, as a lobbyist for Huawei, saying on Twitter last month: “This is not good, or acceptable.”

According to Gordon Chang, an American author and China expert, “Huawei is China,” with Beijing hoping to be able to dominate the field of telecom and artificial intelligence through the company. The Shenzhen-based company was founded by Ren Zhengfei, a former officer in China’s People’s Liberation Army.

Chang says given that China is “at least an adversary and probably an enemy of the United States and free societies,” it’s inappropriate for these former officials to represent Huawei’s interests and further its goals.

In its 2012 report on Huawei and ZTE, the U.S. House Intelligence Committee said it heard from industry experts and current and former Huawei employees that the company may be violating U.S. laws. The report also noted that neither Huawei nor ZTE were forthcoming with detailed information about their relationships with the Chinese authorities or their operations in the United States.

Earlier this year, the U.S. Department of Justice launched a 13-count indictment against Huawei related to evading Iran sanctions, and another 10 charges for stealing trade secrets, committing fraud, and obstructing justice.

The United States is also warning its allies to keep Huawei from their 5G networks, hinting that there could be less intelligence sharing with partners if the company is part of the network.

While visiting the U.K. last week, U.S. Secretary of State Mike Pompeo said the United States “has an obligation to ensure the places where we operate, places where U.S. information is, places where we have national security risks, that they operate within trusted networks and that is what we will do.”

Together with the United States, New Zealand, Australia, and the U.K., Canada is part of the Five Eyes intelligence alliance. Canada and the U.K. are the only two that so far have not ruled out Huawei from their 5G networks.

The federal government says it is still conducting a national security review on whether to allow Huawei in the 5G network.

As reported previously by The Epoch Times, in their visits with Canadian MPs, Huawei lobbyists inquire why the MPs are concerned about Huawei products.

“I advised them that if our allies consider Huawei to be a national security risk, then perhaps we should listen to our allies and not accept Huawei’s promises that they would do nothing to harm the security of Canada,” Conservative MP Peter Kent, who was visited by the lobbyists in 2018, told The Epoch Times in a previous interview.

Cole says Huawei and other Chinese technology providers shouldn’t be allowed to play any role in government and sensitive sectors.

He adds that unless it can be 100 percent guaranteed that no national security risk is involved, “which we certainly cannot at the moment—and until we can prove beyond doubt that Huawei’s competitive advantage did not stem from espionage and theft of Western technology, and until we can demonstrate that contracts were obtained without undue influence with decision makers,” Huawei should not be allowed in Canada’s 5G network.

Chang says whoever controls the 5G technology is going to “dominate the next couple of decades.”

“This is where we write our future. And we’ve got to do everything we possibly can do to make sure that Huawei is not a part of it,” he said.

“It’s going to be difficult, because Huawei has a big lead, but nonetheless as Beijing becomes more provocative, we’re going to see people change their attitudes about it. Certainly it has happened in the United States, where you’re starting to get a bipartisan consensus that China is a malign actor.”

Correction: An earlier version of this article incorrectly spelled the name of Huawei executive Jake Enwright. The Epoch Times regrets the error.