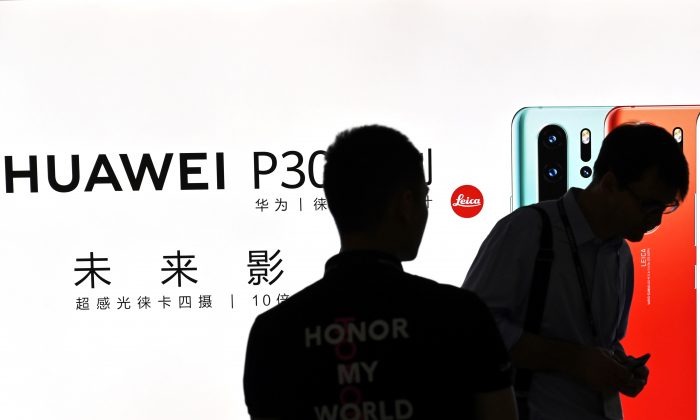 Staffers at Chinese telecom giant Huawei have previously worked for Chinese intelligence or military agencies, according to an analysis of employment records from thousands of employees that have been leaked online, raising further questions about the company’s ties to the Beijing regime.

A recent study by Christopher Balding, an associate professor at Fulbright University Vietnam, conducted with the UK-based think tank Henry Jackson Society, analyzed a database of leaked CVs and found that about 100 Huawei employees had links to Chinese military or intelligence agencies.

“There is significant direct evidence of Huawei personnel acting at the direction of Chinese state intelligence with multiple overlapping relationship links through the Chinese state,” the study concluded.

Balding examined a dataset of 2 million CVs, of which about 25,000 were of Huawei employees, that had been leaked online through unsecure recruitment platforms.

One software engineer, whose work at Huawei appears to give him “enormous control over access to user and provider data,” is simultaneously employed as a teacher and researcher by the National University of Defense Technology in China, a top institution run by the Chinese military, officially known as the People’s Liberation Army (PLA), the study found. The study hypothesized that the employee’s tasks fall under the PLA branch that oversees “Chinese military space, cyber, and electronic warfare capabilities.”

In another case, the study found a Huawei employee who described himself on his CV as a “representative” of the Ministry of State Security, China’s top intelligence agency. Among the responsibilities listed on his CV was “building lawful interception capability into Huawei equipment,” which suggests that his role at the company included “planting information capture technology or software on Huawei products,” according to the study.

The researchers posited that the employee could have been involved in the alleged building of backdoors into equipment supplied by Huawei to Vodafone in Italy a decade ago, first reported by Bloomberg in April. The Bloomberg report said that from 2009 to 2011, the UK telecom firm discovered backdoors in Huawei’s equipment that could have given the latter access to its Italian fixed-line network, which provided internet to millions of users.

Both Vodafone and Huawei acknowledged the vulnerabilities and said they were fixed in 2011 and 2012.

The study also found one employee who previously worked at China Aerospace Science and Technology Corporation (CASTC), a state-owned company that develops space and missile technology. That Huawei employee worked on developing communications systems for the PLA when he was employed at CASTC.

According to The Telegraph, another Huawei engineer, who was involved in developing 5G base stations, wrote on his CV that he wasn’t allowed to say anything about his previous employment “due to the involvement of military secrets.”

The study concluded that “Chinese state and intelligence gathering assets are placed in Huawei within a systemic organization designed to facilitate information flows.”

It added that such a finding directly contradicts Huawei’s repeated claims that it has no relationship with Chinese intelligence and military agencies.

A Huawei spokesperson told The Telegraph on July 5 that the company “does not work on military or intelligence projects for the Chinese Government.

“This information is not new and is not secret, being freely available on career websites. It is not unusual that Huawei employs people from public service and government. We are proud of their backgrounds and we are open about them.”

The company, in an statement to Financial Times on July 7, added that it requires prospective employees with military or government backgrounds to provide documentation proving that they have ceased working for such agencies.

The study’s findings raises further concerns about Huawei’s links with the Chinese regime, as several countries in the EU, including the UK, are due to decide whether to let the company participate in the rollout of next-generation 5G networks.

The United States has repeatedly warned that the company’s equipment could be used by Beijing for espionage or to disrupt communication networks, given Huawei’s close ties to the Chinese military and intelligence services. In addition, Chinese national security laws compel Chinese companies to cooperate with the state when asked to do so.

Huawei has consistently denied those allegations.

Separately, Bloomberg reported on June 27 that Huawei employees worked on at least 10 joint research projects with organs affiliated with the PLA over the past decade. Bloomberg pored over papers from published periodicals and online research databases used mainly by Chinese academics and industry specialists.

Research areas ranged from artificial intelligence to radio communications, the outlet said. Huawei denied that claim, saying that “it does not have any R&D collaboration or partnerships with PLA-affiliated institutions.”

Findings from the latest study, however, contradict this claim. Balding told Financial Times that his analysis of the CVs revealed deep links between the company and state security agencies.

“It was quite easy to find people that hold dual appointments,” he said.

John Hemmings, a director at the Henry Jackson Society, told Forbes that “at the very early stages of analyzing this data trove, we are finding that these CVs show a pattern connecting Huawei employees to the military and Ministry of State Security.

“While one does find some former spooks in Western telecoms, finding these connections in an authoritarian state is extremely different. Once again, we see why Huawei‘s inclusion in Western 5G must be considered very carefully.”