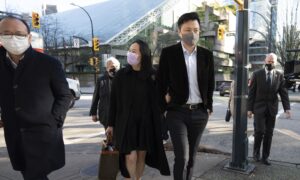 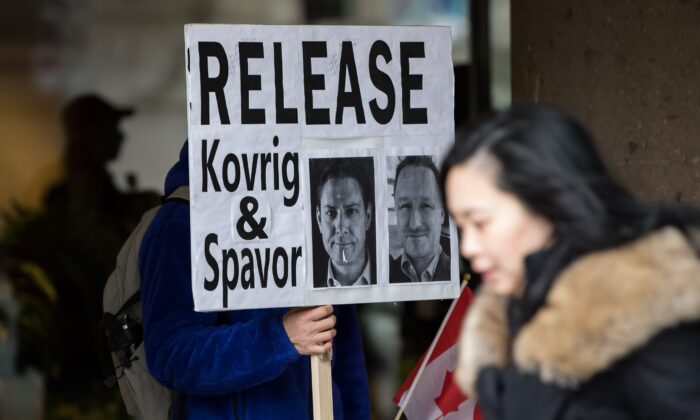 A young man holds a sign bearing photographs of Michael Kovrig and Michael Spavor, who have been detained in China for more than a year, outside B.C. Supreme Court where Huawei chief financial officer Meng Wanzhou was attending a hearing, in Vancouver, Canada, on Jan. 21, 2020. (Darryl Dyck/The Canadian Press)
Canada

Morgan Elliott, Huawei Canada’s vice president of government affairs, repeated the claim of Meng’s innocence, while dodging questions on whether the company views her arrest to be morally equivalent to China’s controversial detention of Kovrig and Spavor, known as “the two Michaels,” during an interview with Global News’ Mercedes Stephenson on Feb. 14.

Elliott also gave contradictory responses about the telecom giant’s involvement in the Chinese regime’s surveillance and control of ethnic minorities within its territories.

‘We Want Everyone Home’

Meng, the daughter of Huawei’s founder Ren Zhengfei, was arrested by the Royal Canadian Mounted Police (RCMP) in December 2018 at the Vancouver International Airport at the request of the U.S. authorities to have her extradited to stand trial in an American court. Meng is charged with bank fraud for misleading multiple financial institutions to violate U.S. sanctions on Iran.

She was quickly released on bail and lives in one of her mansions in Vancouver as she continues the fight in court against the U.S. extradition.

“I think we’re all frustrated with the lack of communications between the government, between governments on a number of issues,” Elliott said. “The company has never done anything wrong. We’ve been transparent in all our interactions. Meng Wanzhou has done nothing wrong.“

“Mr. Ren, like any father, wants his daughter home, just as the families of Michael Kovrig and Michael Spavor want their family,” Elliott said.

The Chinese government detained Kovrig and Spavor soon after Meng was arrested in 2018, which Elliott described as “a political situation that requires a political discussion and political solution.”

The U.S. Department of Justice has laid out public and extensive details of the allegations against Meng and Huawei, based on evidence such as specific dates, events, and bank transactions that meet the threshold to make charges.

By contrast, China’s judicial system is largely controlled by the ruling Chinese Communist Party (CCP), and it had an approximate conviction rate of 99.9 percent in 2019 and 2018. China has not provided evidence or clear details of the allegations against Kovrig and Spavor, yet has held them in a prison since 2018 under vague charges of espionage.

“As a Canadian, though, are you comfortable with calling the detention of Michael Kovrig and Michael Spavor political and it’s just pointing fingers?” Stephenson asked. “They were arbitrarily detained. So I guess I’ll put it to you right now. Will you call for their release? Will Huawei Canada call for their release?”

Elliott told Global News that bringing the two Michaels home has always been the “top three priorities” when his company meet with members of Parliament and the Chinese government.

“We’ve advocated for a number of different issues and we just want to extract ourselves from this political whirlpool that was instigated it by a former administration.”

When asked why his company is unwilling to condemn China’s treatment of the two Canadian citizens, Elliott said Huawei Canada is “not a political entity.”

“As a company, we want everyone home, we want to send Meng Wanzhou back to China,” he said.

Communist China has been condemned for its constant detention of ethnic and religious minorities, human rights lawyers, and other dissidents. The CCP does not tolerate free expression nor allow free and fair elections within its territories.

Elliott was asked why would Canadians trust Huawei’s assertion that it would defy the Chinese state if ordered to use their technology to spy on Canadians, which Chinese laws require.

He responded by equating China’s law with legislation in the United States and Australia that allows for national security agencies and law enforcement to demand companies to hand over information on customers or decrypt information when ordered to do so by the police.

On Feb. 9, 2021, David Vigneault, director of Canadian Security Intelligence, warned about China’s use of technology to monitor minorities and critics at home and abroad.

BBC News also reported in January about Huawei filing a patent for technology that uses facial recognition to identify ethnic minorities, such as the estimated 2 million Uyghur Muslims held in Chinese labor camps.

Elliott said that it is not a patent application, but “a paper posted on our website.”

“That was a mistake. It’s wrong. It’s completely unacceptable and not compatible with the views of Huawei. We don’t condone and we don’t want to see our equipment used to discriminate or oppress any group,” he said.

“You can imagine with a company of 200,000 people, sometimes stuff gets posted and it was a mistake. We unequivocally condone the use of our technology to discriminate or oppress any group.”