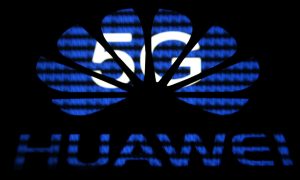 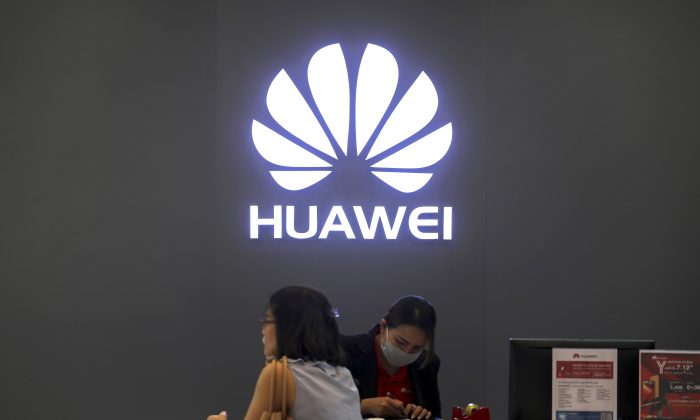 A woman sits next to a salesperson at a Huawei shop in Bangkok, Thailand on Jan. 30. (Athit Perawongmetha/Reuters)
Chinese Regime

While the U.S.-China trade war seems to be cooling down, the United States’ war on Chinese telecom giant Huawei is just getting started. How Huawei and the Chinese communist regime respond to the crackdown reveals key inner workings between the regime and Huawei and what is at stake for the regime.

Huawei CFO Meng Wanzhou, who was arrested on a U.S. extradition request at the Vancouver airport in December 2018, headed back to the courts as part of her extradition proceedings on March 6.

A few days before, on March 1, Canada’s Department of Justice announced it is allowing judicial proceedings in her extradition case to go ahead. The Chinese Embassy in Ottawa issued a swift response, calling it a “political persecution” against Huawei.

Also on the same day, a number of American journalists disclosed that Huawei has invited them to all-expenses-paid trips to China.

Washington Post journalist Josh Rogin posted an invitation letter from Huawei on Twitter, inviting him to “join a select group of U.S. journalists” to visit the company’s facilities in Shenzhen and “meet with various Huawei executives, tour their various product lines, and hold off-record discussions on the various challenges the company is facing in the U.S.”

INBOX: #Huawei is inviting me on an all-expenses-paid junket to China? That’s gonna be a hard pass. Any American journalist who takes Huawei money should be ashamed and shamed. pic.twitter.com/F6ihsSXObk

The letter also asked Rogin not to talk about the invitation with others due to the “limited number of spots” available for the trip.

While taking such trips are a common occurrence in the Chinese news industry, accepting free junkets for journalists is a major line not to be crossed in the West, as it could impact the objectivity of the journalist.

Declaring his rejection of the offer on Twitter, Rogin said, “Any American journalist who takes Huawei money should be ashamed and shamed.”

Other journalists, including Jonathan Landay from Reuters and Ana Swanson from The New York Times and others, also received the same invitation, but they said their letters were sent by the Chinese Embassy.

In addition to launching a media war, Huawei has also launched a legal war.

On March 3, Meng filed a civil case to sue the government of Canada, the border agency, and the RCMP, saying she was detained, searched, and interrogated before being told that she was under arrest.

On March 7, Huawei launched a lawsuit against the U.S. government for prohibiting federal agencies from using the company’s products.

Days after Canada gave the green light for Meng’s extradition hearings to proceed, China accused the Canadian citizens it had detained, Michael Kovrig and Michael Spavor, of stealing state secrets.

The detention of the two Canadians, along with the escalation of the sentence of another Canadian charged with drug smuggling to the death sentence, are widely seen as China’s retaliation of Meng’s arrest in Canada.

Most recently, China blocked canola shipments from a Winnipeg-based company.

Beijing’s use of media, legal, and psychological warfare to protect Huawei show that Huawei and the Chinese Communist Party (CCP) are working as a team to target the United States and Canada.

A lot can be observed from the collective action of the CCP and Huawei and their inner workings as they try to launch a counterattack against the West.

Observation 1: The Close Relationship Between the CCP and Huawei

Although both Huawei and the CCP have repeatedly claimed that Huawei is a private company and there is no formal link between the two, the actions the CCP has taken have uncovered the thin veil between them. After Meng was arrested, the Party’s diplomatic and propaganda apparatus began to constantly attack the Canadian government, Canadian citizens were detained, and the Chinese Embassy in the United States sent out an invitation to media in the name of Huawei.

Founded by former People’s Liberation Army (PLA) officer Ren Zhengfei, Huawei is said to have links to the military, the Chinese public security apparatus, and former Chinese regime leader Jiang Zemin. These strong connections mean that many Party elites have a lot at stake with Huawei. What’s more, having occupied an executive position in the company for a long time, Meng must have a lot of confidential information that the Chinese regime doesn’t want to get into the hands of U.S. prosecutors.

Observation 2: The Strategic Dependence of CCP and Huawei

China’s PLA first launched a media, legal, and psychological warfare strategy in 2003, employing it as a core tactic toward Taiwan. The state strategy is now being applied to Huawei’s battle against the United States and Canada.

The fact that the strategy is being used by the CCP for Huawei shows the level of importance the Party places on the company.

The company is part of many of the regime’s monitoring and surveillance projects, including the Golden Shield Project, the Skynet Project, and the Xueliang Project. It is also a key asset in Beijing’s ambition of dominance in the emerging 5G technology.

Observation 3: The Chinese Regime Wants to Showcase Its Authority Domestically

China’s economy is deteriorating and the regime is aware that many in the Party are not satisfied with how the U.S.-China trade issues are being handled.

The authorities, therefore, want to use their propping up of Huawei as a sign of strength domestically.

Observation 4: CCP Wants the Issue to Be Part of Trump-Xi Trade Negotiations

According to media reports, U.S. President Donald Trump and Chinese leader Xi Jinping could meet by the end of this month to reach a trade deal. By making a lot of noise about Huawei, the CCP wants the company and the case of Meng to be part of the discussions in the trade negotiations.

Observation 5: Creating a Wedge Between Canada and the United States

Even though Meng was arrested at the request of the United States, it was Canadian citizens and industries that China targeted, trying to put psychological pressure on Canada to raise objections to the United States that Canada has been caught in the middle.

This goal is in line with the CCP’s strategy of creating a wedge between Western alliances in order to divide and conquer.