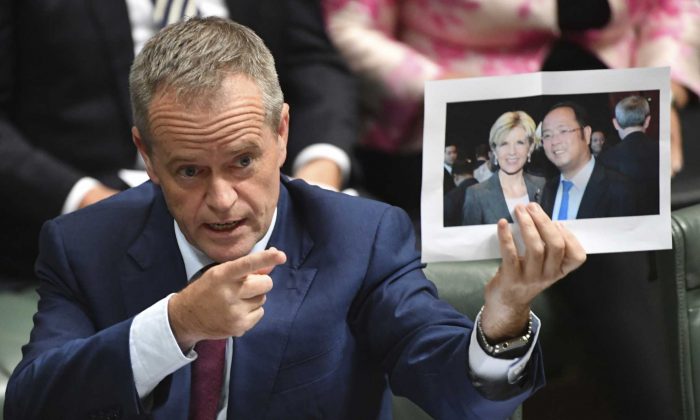 Huang Xiangmo Supporters Do Not Represent All of Us, They Say
By Richard Szabo

A group of Australian Chinese have released a statement voicing their support for the government’s decision to strip Chinese billionaire Huang Xiangmo of his permanent residency visa, contradicting an open letter signed by over 100 ethnic Chinese community groups that purported to represent the Chinese-Australian community’s views at large.

An open letter protesting Huang’s innocence co-signed by member associations of the #Unitedfront ACPPRC on today’s Sing Tao front page. “What’s happened to Huang today could happen to any one of us”. pic.twitter.com/V4YTd2Jdpg

But other voices from the Australian Chinese community are questioning the authority of these 120 groups to speak on their behalf.

The Sydney-based Australian Values Alliance (AVA) took a swipe at the letter that it says represents member organisations affiliated with the Australia Council for the Promotion of Peaceful National Reunification of China (ACPPRC) and others that have the agenda of trying to “brainwash Australian Chinese, undermine Australia’s democracy, and [the] interests of Australian Chinese community as a whole.”

The ACPPRC has been called out by AVA and China experts as being part of the Chinese Communist Party’s (CCP’s) United Front Network.

“The decision made by the Australian immigration to deny the citizenship to Huang Xiangmo and cancel his residency visa is undoubtedly a great one, which is essential for preventing infiltration from foreign government, protecting interests of Australian Chinese communities and upholding democratic values of Australia,” AVA said in a public statement.

“AVA calls on Australian Chinese to cherish freedom and democracy, to be in line with mainstream value of freedom, democracy, and rule of law in Australia.

“For the sake of our dignity and our descendants not being dictated, we should unite as one body to stop CCP’s infiltration and bravely say no to CCP’s threat and temptation.”

“This is what they have always done—use organisations such as the ACPPRC to kidnap the entire Chinese community as only having one view.

A concerned member of the Chinese community, Yun, echoed Feng’s concerns, saying he worried that the actions of the 128 community groups could lead mainstream Australian society to think that Australian Chinese are all accomplices of the CCP.

“The vast majority of the Chinese community support Australian values and oppose the CCP’s infiltration in Australia,” Yun said.

Another Chinese cultural group told The Epoch Times that they had found that a number of signatories of the open letter to be “fake.”

William Ho, founder of the Sydney Youth Dragon and Lion Dance Troupe, said that many only have a registered organisation with a very small to non-existent membership.

“It means that some of them only have a name and have no or very few members,” Ho said. “In another instance, we found that one person registered several groups, so the number of the groups listed is not credible.”

Ho said he agreed with a statement he previously heard from Feng that most members of the Chinese community prefer to stay quiet about their views on the CCP because they still have connections to China.

“Some retired Chinese still need to take their pensions from China to support their daily lives,” he said. “In addition, most relatives of Australian Chinese are still living in mainland China and others have real estate in China.

“There are recent cases of foreign citizens being arrested in mainland China, so some people are worried about being politically persecuted by the CCP” if they are too outspoken overseas.

Kevin Carrico, a China expert and senior lecturer of Chinese studies at Monash University, said that the letter is another case of some organisations claiming to represent all Australian Chinese without their consent.

Carrico said that the members of the Chinese community he has spoken to are not worried by Huang’s political exile.

“He has nothing to do with them, and these self-declared community organisations also have nothing to do with the average Chinese Australian,” he said. “Although there has been an attempt to link this expulsion to Sinophobia or ‘Yellow Peril’ thinking, in reality, this is a case of a politically connected billionaire who made some major mistakes.”

Huang is no “man of the people,” Carrico said. He is “just some rich guy.”

He added that the notion of all Australian Chinese potentially being treated like Huang Xiangmo by the Australian government was “laughable.”

Carrico describes the open letter’s claim of racism as a typical example of friction between Beijing and Canberra over “political correctness.”

“The problem we are discussing is not Chinese influence but rather CCP party state interference,” he said. “The former should be welcomed in a multicultural democratic society, the latter refused in order to protect this society.”

Indeed, the letter went as far as to mention the “false charges” of Australia’s intelligence agencies against Huang, saying: “The unfair treatment suffered by Mr Huang has dealt a heavy blow to the legitimate political participation of people from Chinese or other ethnic minorities. It made the underprivileged people from the Chinese community and other ethnic minorities even more vulnerable.”

This prompted Major General Duncan Lewis, director-general of security at the Australian Security Intelligence Organisation (ASIO), to say during a senate estimates committee on Feb. 18 that the attacks on his agency were inaccurate.

“I am concerned at reporting in Australian, in foreign, and in foreign-language newspapers over this weekend, wrongly asserting that the Chinese community is a target for ASIO,” Lewis said. “This is simply not so … ASIO does not investigate people based on their ethnicity, religion or cultural background.

“And as the DG of security, I can say categorically that from a security point of view the overwhelming majority of people of Chinese heritage are of no investigative interest to ASIO as they are of no security concern.

“We should not impugn the many for the actions of a few.”