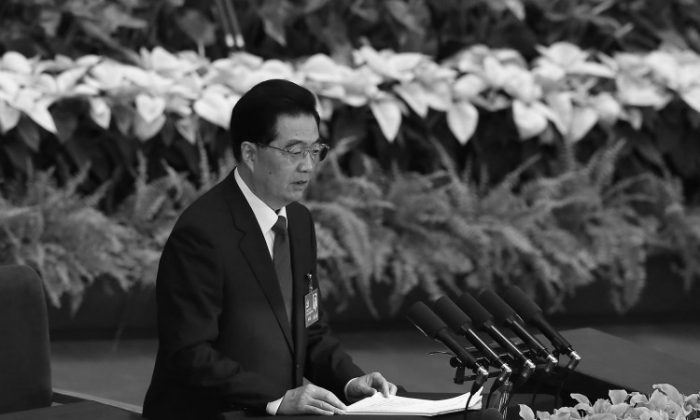 Chinese President Hu Jintao speaks during the opening session of the 18th Communist Party Congress held at the Great Hall of the People on November 8, 2012 in Beijing, China. Hu's report to the Congress laid out economic goals that one economist told The Epoch Times were "just propaganda." (Feng Li/Getty Images)
China

Outgoing head of the Chinese Communist Party (CCP) Hu Jintao has laid out ambitious goals for the growth of China’s economy. Independent experts say his goals are unattainable.

Chinese regime mouthpiece Xinhua reported on Nov. 12 that in Hu Jintao’s report to the 18th Party Congress, he called for China’s 2020 GDP to be twice that of the 2010 GDP.

An article in Global Times, an affiliate of the CCP’s People’s Daily, reported, “Chinese scholars are optimistic, believing if GDP could grow 7.1 percent for the next 10 years starting from 2010, the objectives could be achieved.”

“I don’t want to talk about the feasibility [of Hu Jintao’s development objectivities] because it is just propaganda,” economist Cheng Xiaonong told The Epoch Times.

An advisor in China to former Party leader Zhao Ziyang, who was ousted after taking a pro-student stance during the 1989 Tiananmen Square crisis, Cheng now lives in the United States. He says the 18th Party Congress economic report shows “no improvement in the last 10 years.”

“Does taking GDP as a measure here make any sense? When you use GDP as an expression of development, there are prerequisites: Healthcare, the environment, and justice in society should be guaranteed. It is stupid to talk about ‘double GDP’ when those prerequisites are not considered in GDP statistics.”

Cheng further explained that using GDP is not a good way to measure quality of living. He cited as an example how Chinese enterprises generate a lot of output at the cost of environmental pollution. Chinese citizens will need to live on this polluted land generation after generation and are exchanging their lives for the current GDP numbers, Cheng said.

In addition, in Chinese society, income distribution is not fair, and then there is a serious divide between rich and poor. Due to income inequality, average citizens cannot be assured of their livelihood.

“It has nothing to do with the form of government. Democracy is not required as a solution. It is just that the Chinese regime doesn’t really want to solve those problems,” said Cheng.

Dr. Frank Tian Xie is Assistant Professor at the University of South Carolina-Aiken’s School of Business Administration and a China expert. “It is simply impossible … for any nation to have continuous growth between 7 and 8 percent. This growth rate could never last forever, for any nation.”

Xie explains that the rate of growth is naturally going to slow down over time. Most countries experience a period of rapid economic growth when they transition from a poor country to a more developed country.

Economic growth will definitely slow after the country achieves a certain standard of economic development, and slow down even further when it becomes a fully developed country, Xie said. The Chinese economy is now the second largest economy in the world. Given the relative degree of development, it is certain that the growth rate will slow down, according to Xie.

In addition, Xie said the ten percent GDP growth widely attributed to China is really created by inflation and is the result of a bubble economy. When discounting inflation and the misrepresentation of economic data, the actual Chinese economic growth has only been five to six percent. And now, the economy is grinding to a complete halt, Xie said.

China’s economy is export-driven. If it wants to double in size, at least 30-40 percent of the growth has to be generated by exports, according to Xie. If other countries stop consuming Chinese products, it will not be possible for China to keep growing.

There are also domestic factors that make 7 percent of sustainable GDP growth unlikely. The real estate bubble is going to explode, says Xie and mining resources are running out.

In addition, China does not have demographics on its side, as it has to support an aging population. An increase of labor and raw material costs will decrease China’s advantage in the export economy. This is another reason why economic growth in China must slow down.

According to Xie, there is a yet more important factor restricting China’s economy: The political system under the leadership of the Communist Party. He says that dictatorships must use economic development as an excuse for the legitimacy of their rule.

As a consequence, the practice of using GDP numbers to measure performance will continue. GDP will continue to grow only for the sake of growing. The policies of regime officials and the deformity of the Chinese economy will prevent sustainable development.

“I don’t think Hu Jintao needs to worry that his objectives cannot be achieved,” Xie said. “Not only because he will retire but also because the regime is not likely to make it until 2020.”