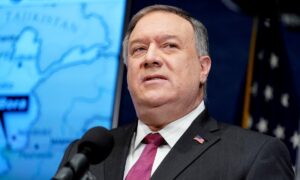 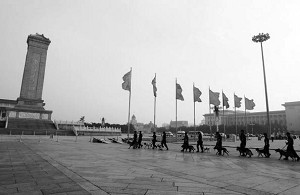 The atmosphere on Tiananmen Square was tense right before the Seventeenth National Congress. (Getty Images)
China

The General Office of the Chinese Communist Party (CCP) Central Committee recently announced that Ling Jihua, a recognized member of the Hu Jintao faction, will replace Wang Gang as director of the General Office. Analysts believe that this change represents a major power shift in the central leadership and a new balance between the Hu and Jiang camps.

This new development came after Hu appointed a new National Security Minister and replaced the former director of the CCP Central Guard Bureau You Xigui, who was considered a close and trusted follower of Jiang Zemin.

There are also reports that Hu's “Scientific Development View” theory may be written into the CCP Constitution during the CCP Seventeenth National Congress. While in the other camp, the power of Jiang's faction has waned. Jiang's son Jiang Mianheng did not make it into the inner circle of the Seventeenth Congress. Sources ponder the significance this victory of Hu's plays in the latest round of the political struggle.

Xinhua Net reported this important personnel change on September 20. Those familiar with the political situation of the CCP say that the director of the General Office is a key position in the Chinese political arena, as he or she is involved in both policy making and important affairs of top CCP leaders, including personal safety.

Often the director of the General Office is also appointed to chair the Work Committee of the CCP Central Agencies, in which case the director would be charged with leading the United Front Ministry, Propaganda Ministry, and the External Affairs Ministry.

Since Hu became a CCP Politburo member in 1992, Ling Jinghua has been managing Hu's office, including arranging Hu's work schedules, domestic and international meetings, and daily life. He is considered Hu's right-hand man.

When Hu became the General Secretary of the CCP after the Sixteenth Congress in 2002, Wang Gang, then director of the General Office, during Jiang's administration was allowed to stay. Hu made no adjustments until now. Analysts believe that this signifies a more solidified power base for Hu.

Early in September, another of Hu's trusted aides, Meng Xuenong, former Deputy Mayor of Beijing, was promoted to Governor and Vice Secretary of the Provincial Committee of Shanxi Province.

During the SARS crisis in 2003, Meng, who was then the mayor of Beijing, was removed from his position. Public opinion believed that in order to remove Jiang's trusted aide Zhang Wenkang, who was the Vice Minister of Public Health at the time, Hu had no choice but to remove Meng as well.

Jiang Mianheng's Political Career May Be Over

Two major changes to the list of the representatives for the CCP's 17th Party Congress shocked the CCP's officialdom—Jiang's dependable ally You Xigui was not elected and Jiang's son Jiang Mianheng was removed. Outsiders suspect Jiang Mainheng's election loss indicates his political career is over.

Hong Kong based Open Magazine reported that officials in Shanghai frequently heard rumors that Jiang Mianheng was under investigation for disciplinary issues and was forbidden to travel abroad because he was involved in many economic crimes. Earlier this year, overseas media noticed that major Chinese news websites, including baidu.com, were not blocking derogatory news like “Jiang Mianheng a suspect” and “Jiang Mianheng arrested.”

Hu's Theories Will Be Written into CCP's Constitution

Another important change at the 17th Party's Congress next month will include “Concepts of Scientific Development,” Hu's ideology for economic development, in the Party's Constitution. An analyst thinks Hu pressed to have his ideology put into the Party's Constitution during the 17th Congress to stress that he will walk his own path—one different from Jiang, which sacrificed the environment for the economy. A scholar said this act symbolizes that Hu has finished his attack against Jiang on an ideological level and is prepared to finish Jiang once and for all.

Hu is Ready for Jiang's Arrest

Sima Tai, an Epoch Times columnist, said the 17th Party's Congress putting Hu's “Concepts of Scientific Development” into the Party Constitution means a lot in the struggle between Hu and Jiang. In the past, Jiang's regime constantly used Jiang's “Three Representatives” to suppress Hu. After the 17th Congress, Jiang's theory will have very little or no importance.

Sima Tai thinks the struggle among CCP's high-level officials is approaching the end. Hu currently holds evidence against Jiang and his son for corruption and the illegal bloody suppression of Chinese people. Hu basically has finished the preparatory work to arrest Jiang Zemin, who is now disposed of his military support. Hu is also ready to enact the rearrangement of high-level officials and nullify Jiang's theory. An order to execute will be the last thing.