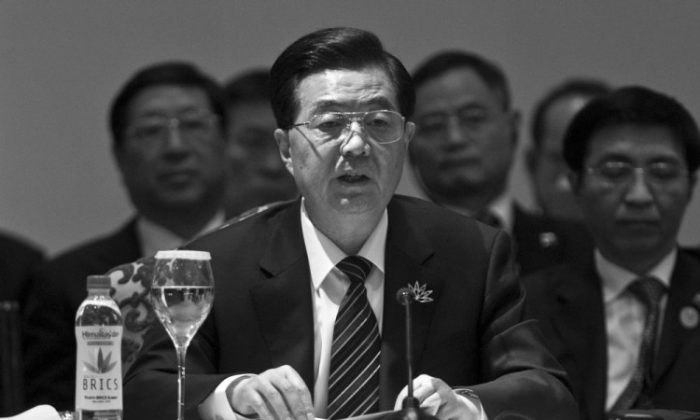 For years, Chinese Communist Party chief Hu Jintao has been at odds with defense minister Liang Guanglie, who has repeatedly challenged Hu’s control of the military, the People’s Liberation Army (PLA). However, recent commentaries published in the PLA Daily, the official military newspaper, were ridden with slogans to “seek progress within stability” and avoid “taking advantage of chaos to make a profit,” an indication that Hu is trying to send a warning message to his opponents in the army to heed his power.

The newspaper is published by the Central Military Commission, the regime’s highest military organ, which is headed by Hu.

Liang, a long-time friend of the recently ousted Chongqing party chief Bo Xilai, has consistently taken a hard-line approach in dealing with China’s international disputes, openly challenging Hu’s command over the army. According to an Epoch Times report published on May 3, Liang had been Hu’s most powerful opponent in the dispute over the Scarborough Reef in the South China Sea. After a Filipino war ship attempted to arrest Chinese fishermen off the coast of the island on April 10, Liang made a visit to Guangdong and Guangxi province, two regions that border the South Sea. His speech during the visit hinted at his desire for an aggressive military response: “Use the military with carefulness, gauge the situation when using the military, and use the military according to the law.”

But if China were to take military action, it would most likely provoke a response from the U.S., as the Philippines is a long-time American ally.

Liang’s approach is in direct opposition to Hu’s stance on Sino-American relations, which Hu made clear at the China-U.S. Strategic and Economic Dialogue held on May 3 and 4: “The world we live in has enough room for China, the U.S., and other countries to develop together… Both parties should have mutual trust and understanding, while acting in the spirit of equality and properly handling our differences.”

But an article published in the PLA Daily on May 12 may suggest that Hu is finally gaining an upper hand in the fight for control over the PLA. The article gave a stern warning message to those in the military who had urged for a stronger response to the dispute with the Philippines, criticizing them of “wanting to start a war out of anger and to trigger a major conflict with the United States…provocateurs are doing this to achieve the sinister purpose of ‘fishing in muddy waters to benefit from the chaos.'”

Liang himself also softened his rhetoric when he visited the United States from May 4 to 10. On May 7, Liang met with U.S. Defense Secretary Leon Panetta at the Pentagon and expressed his desire for a China-U.S. relationship that echoed Hu’s long-standing policy:  “At present, China-U.S. bilateral relationship is on a new starting line in history to build a new kind of military relationship based on equality, cooperation and mutual benefit.”

In addition, the Taipei Times reported that while responding to a question about U.S. arms sales to Taiwan in September last year, Liang said that his current visit, as well as his invitation for Panetta to visit China later this year, is representative of “a kind of turnover in the China-U.S. military relationship even after the U.S. arms sales to Taiwan.” This may be a sign that the defense minister has finally relinquished his grip over the army and is instead following Hu’s command.

Furthermore, in response to the Pentagon’s annual report to Congress on the Chinese military, released last week, Chinese Defense Ministry spokesman, Geng Yansheng, accused the United States of exaggerating China’s defense capabilities. He stated on May 21: “The United States’ spreading of the so-called ‘Chinese military threat’ is completely unsubstantiated.” As Hu Jintao is the top military commander, this is a move that can be interpreted as Hu’s dismissal of Liang’s earlier efforts to appear friendly while on his visit to the United States, again suggesting Liang’s loss of power.

The next day, another commentary published on the Liberation Army Daily revealed Hu’s last warning to those disloyal to him: “Abiding by party discipline is the political responsibility of every party member, the most important being the strict adherence to political discipline.”

In a previous Epoch Times report, Epoch Times columnist Li Tianxiao commented that Liang’s hard-line approach on the Scarborough Reef dispute can be seen as a way to divert Hu’s attention away from punishing his friend Bo Xilai and security chief Zhou Yongkang, both of whom are part of the “bloody-hands faction” that is involved in the persecution of Falun Gong: “If Hu does not stress the South China Sea conflict, then this can weaken Hu’s control over the military and mark Hu as bringing humiliation to the country. If Hu gets involved in the South China Sea conflict, then this will weaken and slow down the punishment of Bo Xilai and Zhou Yongkang.”

However, given Bo Xilai’s recent disgraceful public ousting, Liang’s decision to finally follow Hu’s command may be a sign that the bloody hands faction is quickly losing its grip on the military.