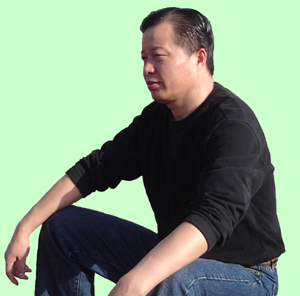 Recently, Beijing rights advocator Hu Jia met with renowned Chinese rights attorney Gao Zhisheng, who has been isolated from the outside world for a long time. According to Hu, the meeting went smoothly. Gao's family had a chance to be relaxed after a long period of suppression. RFA interviewed Hu regarding his visit.

About a month ago, Gao broke through the Internet blockade and told the world his family's torment. Since then the international community has pressured the regime to cease the persecution. Not long after this incident, the regime removed the stringent surveillance from Gao's apartment building. Hu Jia, who always supported Gao and his family, was then able to meet with Gao.

During the interview on May 9, Hu told an RFA journalist that Gao's health is fragile. Gao still suffers from the injuries sustained during his incarceration, “I went to visit him on May 6 to ascertain his health and well being. Does he need any help? Not only for him, but also to meet with his wife Geng He, daughter Ge Ge and son Tian Yu. Gao is thinner than the last time I saw him. During our conversation, he had to put something behind his back for support after sitting for a while. I know that is the result of the interrogation by torture in the prison. I also saw his leg wounds, which are very obvious, resulting from being bound to a steel chair for over 500 hours. He has been out of jail for four months, but those wounds are still conspicuous.”

Gao went to his hometown in Shanxi province to visit his relatives during the May 1 long holiday period. Gao told Hu that his relatives also suffered during his imprisonment. Hu conveyed Gao's feelings, “He (Gao) said that he never thought the communist regime was so unscrupulous. The persecution to himself was cruel enough yet they still wanted to implicate his kin. After he visited his relatives, he knew that all his relatives, brothers and sisters, and the children of his brothers and sisters, his mother-in-law, all had been affected by house arrests or threats, or pressured by working units. Especially the case was Gao's sister, as she could not even see her husband for the last time before he passed away because his sister and the children of his sister were all detained during that time. These things made Gao suffer, and he felt unbearable pressure.”

Gao was secretly arrested in August 2006, and in December 2006, sentenced to three years in prison on subversion charges but with a five-year reprieve and deprival of political rights for one year. After that, Gao seemingly had disappeared from this world, until April 6, 2007, when he successfully contacted Hu Jia to disclose his torment during his incarceration and interrogation, and the strict surveillance his family was under. On the same day of that phone call, Gao was again taken away by the regime for nearly a week. Finally, because of Gao's insistence and the international pressure brought upon the regime, they agreed to remove the surveillance on his wife and children.

Hu said, “Currently, Gao is a difficult issue for the regime. It is even more afraid of him now than before his arrest last year. Gao made up his mind on the day he called me. He kissed his son Tian Yu before leaving with the police. After he walked out the door, he told the police that he did not plan to return to his home. He said he wanted to exchange peace and dignity for his family with his imprisonment. On the contrary, keeping Gao out of prison became the regime's only option, because putting him in jail meant that all the rumors they had spread, such as Gao making a deal with the regime, Gao refuting what he did in the past, would all have been exposed. So the regime is afraid.”

The regime also agreed that Gao should find a job to make a living, but not law related. Hu said, Gao has already started to work, but is still accompanied by police, day in and day out. “Everyday, those people follow him, three vehicles follow him closely,” Hu said.

But Gao's communications to the outside world have not been fully restored, except for his relatives, who visit him in person as it is the only way to contact him. According to Hu Jia's understanding, besides Hu Jia, Gao's other friends also go to visit him, although their meetings were not interrupted. Gao was warned by police because of these meetings.

Hu said, “The police know everything about those non-relative visits. They pressured him (Gao), and said he crossed the line. My visit was one of their top concerns. What I can say is that the police knew everything about my visit; there must be secret monitoring, just not as obvious as before. For now, Gao needs to rest and protect his family—he needs time to adjust. The regime is also trying to maintain this fragile balance; they are very concerned about Gao speaking up again.”