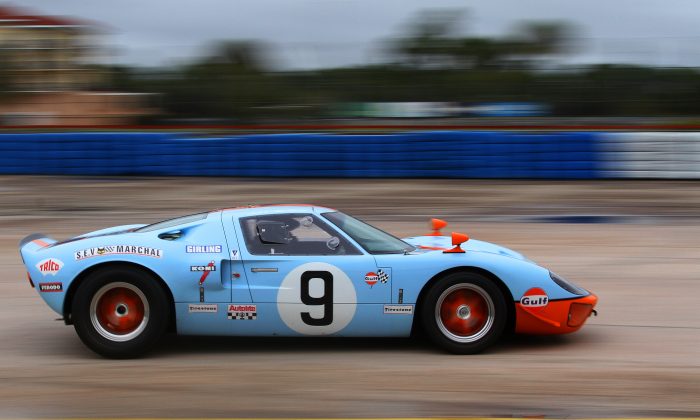 SEBRING, Fla—Historic Sportscar Racing, fresh from its second running of the Classic 24 at Daytona, is offering up its traditional season finalé at Sebring International Raceway Dec. 3–6.

The event features sports and sports-racing cars from the 1950s to the first decade of this century: from little-known marques such as Todd Wetzel’s 1957 Turner 950 to popular classics like Tom Shelton’s 1965 Lola T70 Spyder, replicas like Art Woodworth’s 1968/2014 Bailey Ford GT40, the usual slew of fast and loud Corvettes and Mustangs, plus a pack of Porsches from old 911s and 914s to modern Caymans and Cup cars.

Though the cars are classics (and very expensive) they are also race cars, and their owners drive them to win; sometimes they spin, sometimes they collide. They always entertain.

The weather looked ugly but aside from a lot of heavy fog and a brief shower during the lunch break, the rain stayed away and by the final two races of the day there were even (very small) clear patches in the sky. The forecast is for better and er for the rest of the weekend—dry and not too hot with plenty of sunshine.

Saturday and Sunday offer full schedules of racing starting AT 8 a.m. both days and finishing Sunday evening with the Four Hours of Sebring mini-endurance race.

The atmosphere is relaxed, the paddock is open to spectators, the cars or gorgeous, and the action recalls the classic sports car battles of the past. Come out to Sebring this weekend and see for yourself.