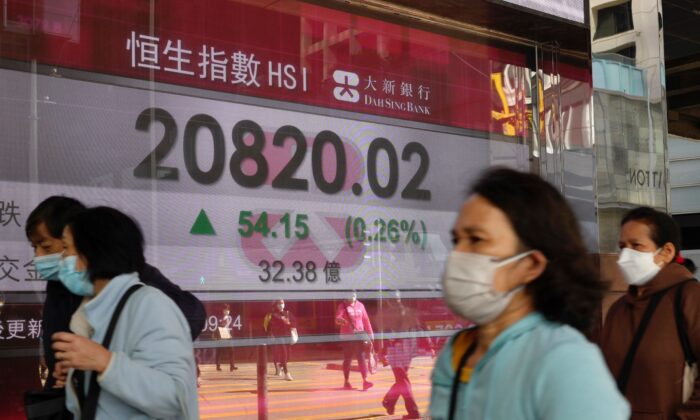 HSI Fell 769 Points Below the 20,000 Mark Amid US Interest Rate Hike and China’s Pandemic

By industry, raw materials, energy, and technology sectors were the hardest hit areas.

As the COVID-19 pandemic continues in mainland China, 19,000 new local cases were reported in Shanghai on April 24, but the actual number may be much higher due to the Chinese Communist Party’s (CCP) minimalist reporting practices. China’s food and beverage and retail stocks fell sharply as the outbreak in Beijing spread along multiple chains, with Seabed Saloon (06862) down 15.8 percent, Nesco’s Tea (02150) down 8.2 percent, Jiumaojiu (09922) down 10.4 percent, Anta (02020) down 8.3 percent, and Gomez Retail (00493) down 6.1 percent. Tencent started to adopt an A/B working format in Beijing on April 25.

After Tencent Video announced a price increase recently, the Overseas edition of People’s Daily said the price increase on the platform should be accompanied by an improvement in matching service levels. Currently, there are certain online platforms that provide services with bundled packages, overbearing terms and conditions, and implicit advertising, which negatively affect the user experience, it said.

Some HSBC shareholders have suggested that the bank consider a separate listing of its Asian operations to reduce political risk and unlock value, British media reported.

Kuaigou Taxi (formerly known as GoGoVan), which accounts for more than half of the Hong Kong stock market and has suffered losses for four years in a row, submitted its listing application with CICC, UBS, BoCOM International, and ABC International as co-sponsors. The company operates in more than 340 cities in China, South Korea, Singapore, and India.

As fears of further lock-downs in mainland China have grown, so has pessimism about the yuan and the Hong Kong and Chinese stock markets, said Zhao Zhixuan, chief Fx rates strategist for Asia at Bloomberg Industry Research.

The Shanghai and Shenzhen stock indexes also opened sharply lower on April 25 and accelerated their decline in the afternoon, with the Shanghai index falling more than 5 percent to the 3,000 point mark and 20 percent below its peak in late 2021, entering a technical bear market. The three major A-share indexes fell more than 5 percent on April 25. On that day, more than 4,600 stocks in Shanghai and Shenzhen retreated; more than 700 stocks fell by their daily limit; while only 150 stocks rose.

On April 18, news broke that Tian Huiyu, the former president of China Merchants Bank, was removed from his position and is under investigation. China Merchants Bank (03968) Hong Kong shares fell 10 percent, and A shares fell more than 6 percent. “We are very anxious as CMB’s share price fluctuated last week,” the bank’s vice-president said in response to the sell-off.

For fund managers, this year could be worse than 2008, Li Bei, founder of Shanghai Banxia Investment Management Center, told Bloomberg. Its funds have cut their exposure to Chinese equities to zero in case the economy worsens and Chinese stocks fall further. Li said it’s hard to find a place to make money now.

Offshore Yuan Fell Below the 6.6 Mark Against the Dollar

In addition to the stock market plunge, the Chinese currency also fell sharply on April 25. The offshore yuan fell below the 6.6 mark against the dollar (USD/CNH), losing nearly 800 basis points on the day for the first time since November 2020.

The onshore yuan fell 669 basis points to 6.5544 against the dollar, the lowest since April 9, 2021. The central parity rate of the RMB against the US dollar fell more than 300 basis points during the day, hitting an eight-month low.

The China Securities Journal quoted Ming Ming, co-chief economist of Citic Securities, as saying that as the virus spreads in major cities in mainland China, the relatively fast tightening cycle of the U.S. Federal Reserve has driven capital back to the United States and the the U.S. dollar index has strengthened, all exacerbating the downward pressure on the RMB exchange rate.

The UBS Wealth Management Investment CIO’s office released a report on April 22, saying that due to the pandemic in many places in China and the challenges of economic growth, as well as the Fed’s more hawkish stance, the bank lowered the target exchange rate of RMB against the U.S. dollar in June to 6.55 from the original 6.40. The target for September, December 2022, and March 2023 was lowered to 6.50 from 6.45.