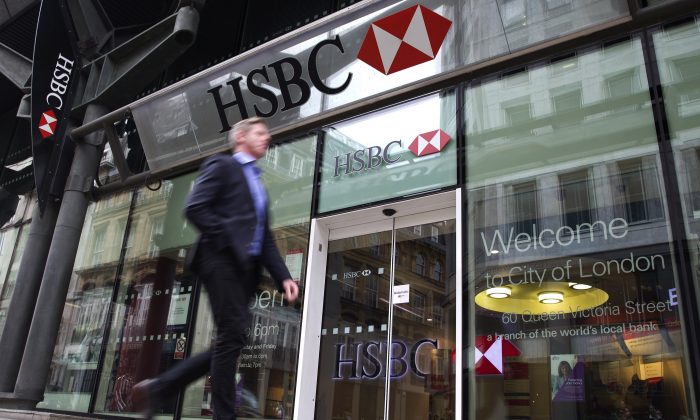 A businessmen walks past the entrance to a HSBC bank branch in London, on June 9, 2015. (Justin Tallis/AFP/Getty Images)
Business & Markets

HSBC May Defer Decision on Moving Headquarters From London

LONDON—HSBC, Europe’s largest bank by market value, may defer into next year a decision on whether to move its headquarters out of London, with management conceding Monday they might need more time to assess whether relocating to Asia would make sense in the long term.

The bank has been steadily shifting its center of gravity toward the fast-growing Asian economies — on Monday it announced a new joint venture in China’s booming Pearl River Delta region. But Chairman Douglas Flint stressed no decision has been made on whether to return HSBC’s domicile to the region where it began 150 years ago.

“We’re part way through and if we need to take longer we will,” Flint told reporters on a conference call.

After being hit by a series of regulatory crackdowns and fines in Europe and the U.S., the bank is carrying out a sweeping reorganization to shift focus to Asia, where it expects a rapidly growing class of newly wealthy people to drive profit. The region accounted for about two thirds of the bank’s profit for the first nine months of 2015, even though it’s home to only a third of its staff.

Pre-tax profit jumped by a third in the latest quarter as it paid out less in fines, settlements and British customer compensation ordered by regulators.

The bank posted $6.1 billion in profit for the July-September period, up 32 percent from a year earlier. Revenue slipped 4 percent to $15.1 billion.

CEO Stuart Gulliver said a stock market drop over the summer in Asia, sparked by a sell-off in China, weighed on revenue.

“Our third-quarter performance was resilient against a tough market backdrop,” Gulliver said in a statement

Operating expenses, which include fines and other regulatory expenses, fell by $2.1 billion, or about a fifth, from a year earlier to $9 billion for the quarter.

Though it has not yet decided whether to move its headquarters, the bank is clear on where it thinks its commercial future lies — China and the Asia-Pacific region. At the same time, HSBC has warned about the economic risks facing Britain if the country opts to leave the European Union in a referendum that is due by the end of 2017.

It’s also complained about the cost of a levy that the British government puts on banks — HSBC is set to pay around $1.5 billion this year alone on that. Gary Greenwood, a banking expert at Shore Capital, suggested that proposed changes to the levy and other regulations have removed some of the pressure for the bank to move.

“But it has clearly not been enough to convince management to stay in the U.K. just yet,” he said.

A move would be a massive blow to the Conservative-led government, which has sought to end the banker-bashing that followed the 2008 financial crisis and wants to retain London’s status as a global financial power.

HSBC on Monday also announced a joint venture with Chinese state-owned Shenzhen Qianhai Financial Holdings to engage in a “full spectrum” of securities and investment banking businesses in a deal that gives it majority control.

The bank said it was taking a 51 percent stake under rules permitting Hong Kong-funded banks to take a bigger share of such ventures than foreign banks are allowed. The joint venture is based in Qianhai, a pilot special economic zone in the southern Chinese boomtown of Shenzhen, next door to Hong Kong, that is intended as a test bed for liberalization efforts on the yuan and financial services.

“Establishing a joint venture securities company in China would boost HSBC’s ability to support the evolution of China’s capital markets as they become an increasingly important source of financing for growth and of investment opportunities for domestic and international asset managers,” Gulliver said

In June, the bank announced a major reorganization, including slashing 25,000 jobs, or about 10 percent of its workforce, and selling unprofitable businesses in countries such as Turkey and Brazil.

HSBC is listed on the Hong Kong and London stock exchanges.