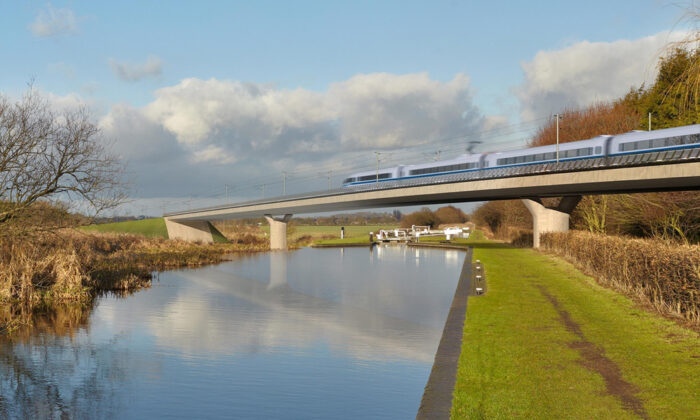 Image of the Birmingham and Fazeley viaduct, part of the proposed route for the HS2 high speed rail scheme in England, in an undated handout photo. (HS2/PA)
UK

HS2: UK Ministers Will Not ‘Blindly Follow’ Plans Drawn up Years Ago

The Transport Secretary Grant Shapps has added to growing speculation over the future of the eastern leg of HS2, saying ministers will not “blindly follow” plans drawn up almost two decades ago.

In an interview with the Financial Times, Shapps signaled that a major rethink of the high-speed rail project between Birmingham and Leeds could be in order.

He told the paper, “We want to make sure we get trains to Leeds in a way that actually benefits people on the network and not blindly follow some plan invented 15 to 20 years ago which no longer benefits people.”

Construction work on phase one of the high-speed rail project from London to Birmingham is ongoing.

But after the government-commissioned Oakervee Review warned last year that the final bill for HS2 could reach £106 billion ($144 billion) at 2019 prices, there were concerns that the eastern leg of phase 2b could be scrapped.

This was further compounded when the National Infrastructure Commission said in December that the focus should be on regional connectivity.

Shapps told the Financial Times the creation of the Northern Powerhouse Rail (NPR) scheme, which is aimed at connecting cities in the region on an east–west route, should also be taken into account.

He said: “Midlands Rail Hub and Northern Powerhouse Rail are things … they’ve been invented, they hadn’t been when HS2 was first designed.

“We need to work these things together. Are we doing things in the best way and in the right order?”

“You cannot trust a word the Tories say,” he said. “Expecting people to accept endless rebadging of promises made years ago is insulting.

“Poor transport connectivity continues to hold back the North, Midlands, and beyond and the Conservatives’ record is one of total failure to deliver.

“Communities that stand to lose out once again—thanks to the government’s incompetence and inability to keep projects on track—will rightly feel betrayed by yet another broken promise dressed up as a new announcement.”