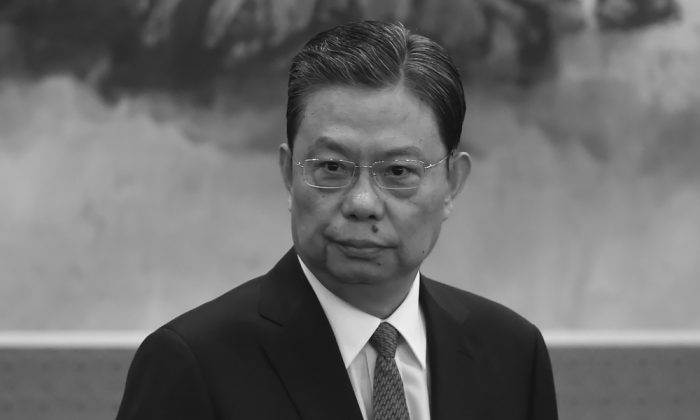 Zhao Leji, Secretary of the Central Commission for Discipline Inspection (CCDI), stands as he is introduced as a new member of the Communist Party of China's Politburo Standing Committee, in Beijing on Oct. 25, 2017. (Wang Zhao/AFP/Getty Images)
Chinese Regime

Since Chinese Communist Party (CCP) leader Xi Jinping appointed a new official to head the Party’s internal anti-graft watchdog organization, there has been a lot of media speculation about what direction Xi’s anti-corruption campaign will take over the next five years. Now, after the watchdog made personnel changes at three major financial institutions in less than a month, it appears it has already set its targets.

Cleaning Out the Jiang Faction in the Finance Sector

Since the beginning of this year, several high-profile officials in the finance sector and wealthy businessmen with ties to former party leader Jiang Zemin were taken down under Xi’s anti-corruption campaign, according to the Taiwanese newspaper Liberty Times.

According to the newspaper, the stock market turbulence in the summer 2015, which saw A-shares on the Shanghai Stock Exchange lose a third of their value within a month, was the work of officials belonging to the Jiang faction, carried out for the purpose of creating social disturbance and eventually leading to Xi’s downfall.

In January, Chinese billionaire Xiao Jianhua, a key money launderer for Jiang’s faction, was reportedly taken under Chinese regime custody when he disappeared from his apartment in the Four Seasons Hotel in Hong Kong. According to reports by the BBC and Hong Kong newspaper Apple Daily, Xiao was then held under CCDI investigation.

A high-level source told The Epoch Times that the investigation of Xiao was intended to implicate other members of the Jiang faction, especially Zhang Dejiang, who recently retired from his powerful position in the CCP’s top decision-making body, the Politburo Standing Committee.

Lin, the new CCDI director at the insurance regulatory commission, is part of Xi’s “Fujian-Zhejiang New Army,” officials who worked with Xi during his career in Fujian and Zhejiang provinces, according to Hong Kong media HK01. Lin was Xi’s subordinate when Xi served as governor of Fujian Province from 1999 to 2002, and now is expected to intensify the investigation into corruption at the insurance commission.

Prior to Lin’s arrival, important investigations were launched. In April this year, Xiang Junbo, the former chairman of the insurance regulatory commission, was put under investigation for “severe disciplinary violations.” For six years while Xiang was at the helm of the commission, the Chinese insurance sector had turned into a den of corporate raiders. For example, insurance companies during Xiang’s time moved away from traditional insurance activities and poured money into volatile assets.

Evergrande Life Insurance Company, for example, saw its premiums increase by 40 percent in 2016—with much of the proceeds being used for riskier activities, such as buying up large stakes in China Vanke, a real estate developer.

Another of Jiang’s money launderers, Wu Xiaohui, the chairman of Anbang Insurance Group who made headlines in 2014 with the purchase of the Waldorf Astoria hotel in New York City, was detained by Beijing anti-corruption investigators in June.

Similarly, at the banking regulatory commission, Xi has placed another ally. According to Hong Kong media, Li had been with the CCDI for over 22 years, and he took part in anti-corruption work against two powerful CCP officials, Bo Xilai and Sun Zhengcai. Both Bo and Sun were members of Jiang’s faction and both were implicated in planning a coup attempt against Xi at a briefing at the 19th National Congress.

In May, the commission’s ex-assistant chairman Yang Jiacai was placed under  investigation, and in August, CCDI announced that he had been “shuangkai,” meaning he had been simultaneously expelled from the party and stripped of his official title.

At the Securities Association of China, for which the CCDI did not name a new director, one one of its four vice-chairmen, Yao Gang, had been placed under investigation by the CCDI for “serious violations” in November 2015, a few months after the Shanghai stock exchange turbulence. In July this year, Yao, accused of “disrupting the order of the capital market” and other charges, was expelled from the party and dismissed from office. A month later, China’s highest prosecution office Supreme People’s Procuratorate announced its own investigation into Yao for bribery.

In November 2015, Hong Kong media Oriental Net reported that Yao had a connection to the Chinese tech conglomerate Founder Group, the company from which Ling Jihua, a member of Jiang’s faction who had been sentenced to life imprisonment for corruption, had siphoned off millions for overseas investments.