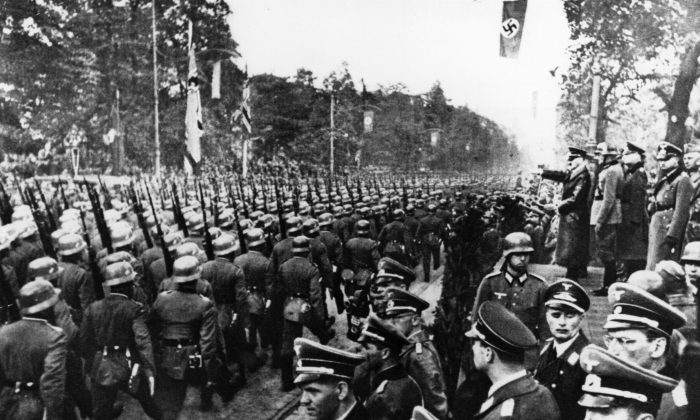 German troops parade in front of Adolf Hitler and Nazi Generals after entry into Warsaw on Oct. 5, 1939. (Keystone/Getty Images)
Europe

How World War II Broke Out 80 Years Ago

Early on the morning of Sept. 1, 1939, the German battleship Schleswig-Holstein fired the first shots at the Polish garrison stationed at the Westerplatte peninsula on the Baltic Sea, marking the outbreak of World War II.

On the same morning, the German army (Wehrmacht) invaded Poland’s borders from the north, west, and south.

The war was undeclared. A false flag operation staged by an SS officer, Alfred Naujocks, on the eve of the invasion was used by the Germans as a pretext to attack Poland. Naujocks arranged an incident that looked like a Polish attack on a German radio station in the then-German border city of Gleiwitz (today Gliwice, Poland). He took some convicts and dressed them in Polish uniforms to be mowed down later by their SS guards, who thereafter identified the corpses to the police as the bodies of Polish raiders.

This incident, as well as the pre-war situation and warfare, were analyzed in detail by the British historian Norman Davies in his book “No Simple Victory: World War II in Europe 1939–1945.”

The Lead-Up to War

It can’t be said that the war was completely unexpected. According to Davies, conflicts and tensions leading to the war began at the end of World War I. The Bolsheviks, who seized power in 1917 as a result of the Russian revolution, weren’t invited to the peace conference following the end of World War I, and Germany was invited only to sign the treaty without comment and to pay reparations. Totalitarian regimes came to power in these two countries—the Soviet communist regime and the German fascist (Nazi) regime—both of which were unhappy with the settlement achieved at the peace conference.

Several local conflicts between Eastern European countries took place during the years 1918 to 1921. One of them was a Soviet attack on Poland with the intention to spread communist revolution from Russia to Germany. The invasion was defeated by the Poles.

During the years 1921 to 1934, the Nazis incited grievances among Germans in neighboring countries. “In Austria, which was Hitler’s homeland, they gained many recruits in a drive to suppress the democratic republic. In Czechoslovakia, they egged on the German separatists of the … Sudeten [region],” wrote Davies. In the free city of Danzig, which was administered by the League of Nations, with neither Germany nor Poland having been able to claim it for themselves, they promoted reunion with Germany.

In 1938, Austria was annexed into Nazi Germany without an open war. Next, Hitler demanded the Sudeten from Czechoslovakia, and due to the initiative of the then-British prime minister, the Munich Agreement was reached that required Czechoslovakia to accept Hitler’s demand.

The Nazis policy of territorial expansion into Central and Eastern Europe was driven by the ideological principle of “living space” (Lebensraum in German). It was closely tied to Nazi racism that made the Nazis believe that the Germans belonged to a superior race; the Latins, such as the Italians and French, were somewhat inferior. The Nazis also despised the Slavs, such as the Poles, Ukrainians, and Russians, and hated the Jews.

It wasn’t difficult to guess that after these easy victories Hitler would choose Poland as the next target. In March 1939, Great Britain issued a formal guarantee of the independence of Poland, and France followed suit.

To ensure that the Soviets wouldn’t intervene, Germany concluded the Nazi-Soviet Non-Aggression Pact in August 1939, which included a secret protocol dividing Poland and the Baltic countries into German and Soviet spheres of influence.

Germany amassed its troops at the Polish border just before the war, but Poland was told by the Western allies to delay mobilization, so as not to provoke Hitler. Consequently, many Polish divisions didn’t reach their positions when the war broke out, which allowed a German spearhead to reach Warsaw within the first week.

On Sept. 3, France and Britain declared war on Germany, but did not take any military action. The German army encountered strong Polish resistance. However, on Sept. 17, the Soviet army invaded the Polish frontier, and both Soviet and German armies met at the demarcation line dividing occupied Poland. Poland was forced to capitulate on Oct. 5.

The Soviets invaded Finland in November 1939, but encountered strong resistance from Finns despite a superiority in military forces. However, in February 1940, the Finns couldn’t resist the aggression any longer and accepted a peace agreement; the Soviet Union was expelled from the League of Nations for that invasion. Under the Nazi-Soviet Non-Aggression Pact, the Soviet Union annexed a part of Finland and three Baltic countries: Estonia, Latvia, and Lithuania.

It was hard to imagine the consequences of World War II when it began 80 years ago. It gave rise to the spread of communism into Eastern Europe and Asia, the Cold War, and the emergence of the United States as a superpower.