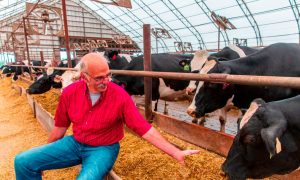 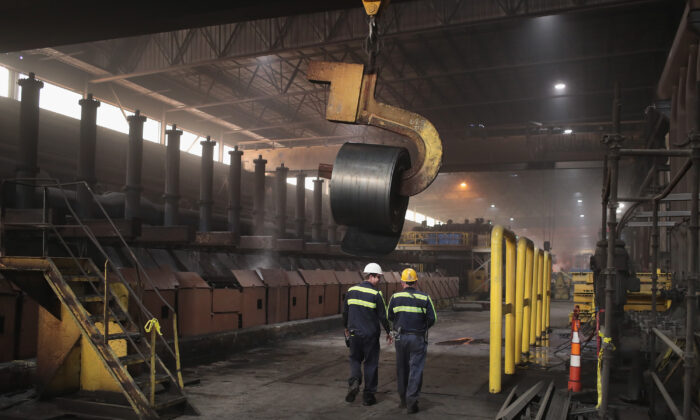 Workers remove a coil from the production line for quality-control testing during steel production at the NLMK Indiana steel mill on March 15, 2018 in Portage, Indiana. (Scott Olson/Getty Images)
Viewpoints

How Will USMCA Help the US Economy?

No trade agreement is ever perfect, but this one is positive for US labor

For economic purists, free trade is the holy grail upon which the wealth of nations is built and sustained. The underlying argument is quite compelling: People should be “free” to enter into a business relationship with whomever they choose.

Furthermore, free trade is good for everybody, because, well, it’s based on freedom, right?

Hence, the celebration of the North American Free Trade Agreement (NAFTA) by businesses when it was signed into law by President Bill Clinton in 1993 and implemented in 1994. It’s true; wealth is created and expanded by free trade. But, as history has shown, politically managed trade agreements fall far short of unfettered free trade and often result in wealth becoming more centralized and concentrated at the top.

Recall, for example, that in the latter stages of the Industrial Revolution, workers in various nations unionized to seek to be more equitably rewarded for their labor in the factories, mines, and assembly lines. Naturally, the super-wealthy corporate elites of the day weren’t thrilled about unions because they raised costs and lowered profits.

But as unions were formed and formalized, labor laws were enacted that prohibited extreme working conditions and child labor, and established a defined workweek and other benefits we all take for granted today.

Although corporations fought against the union movements, political leaders correctly understood that unions were a stabilizing influence. A society with masses of impoverished workers and only a few ultra-wealthy at the top is a proven formula for violence and civil unrest. Bolshevism was often viewed as the solution to broad wealth gaps (in the current Democrat Party, it still is), which would mean the end of big businesses.

That brings us back to NAFTA and the United States–Mexico–Canada Agreement (USMCA).

For big business, NAFTA was indeed a windfall. Instead of paying union wages, or even minimum wage rates for that matter, U.S. manufacturers could relocate to the Third World right next door, i.e., Mexico, and pay members of their workforce a few dollars a day. Business profits went up by relocating to Mexico.

Unfortunately, for the estimated 2 million Americans who lost their jobs to Mexico and other low-paying, emerging economies, NAFTA wasn’t such a happy event. Formerly middle-class U.S. workers suddenly found themselves in the lower middle class and struggling to stay even there. Towns across the United States lost their economies to Mexico, too. Happily, however, the products they used to make for their former employers were still available for purchase in the United States, and often at a lower price.

Thus, we saw the beginning of the ongoing trend of the wealth gap in America widening, instead of remaining steady or narrowing, as the middle class lost ground.

Sure, but the new jobs often paid less and lacked the prior benefits they enjoyed. Those benefits, by the way, helped American society across the economic strata stay healthier and wealthier. Taking those away diminishes society’s tax and consumer bases, and is a drag on public health systems.

It’s a similar story with U.S. firms moving to China, which had even lower labor costs, also known as slave or forced labor. American workers can’t compete with that. Unfortunately, those same poor working conditions remain the norm for most of the world today. The opportunities to earn a living are few, and the power disproportionately favors multinational firms over labor.

Criticizing NAFTA and global free-trade agreements in general, therefore, isn’t anti-trade or even an anti-free trade position per se. But it must be recognized that not all freedoms—nor free-trade consequences—are equal. As pointed out above, workers living during the Industrial Revolution were “free” to work in the factories for subsistence wages, and so were their children.

Thus, while pre-union workers had almost no rights and lived on subsistence wages, we see a similar effect today. Globalism lets businesses avoid unions and the added costs they bring to production, and, in the process, impoverish the middle classes of rich nations. Bad trade agreements can destroy and destabilize what before was a flourishing economy with a healthy middle class.

On the flip side, the USMCA aims to fix some of the more blatant flaws of NAFTA. It will give Mexican labor the right to unionize and improve working conditions, and is supposed to eliminate forced labor. In other words, wages, workers’ rights, and working conditions will improve with USMCA. That may make U.S. labor more competitive.

But there’s more good news. The agreement would also require that U.S. cars have at least 40 percent of their parts made in the United States by American workers who are paid at least $16 per hour. This requirement may actually result in American car manufacturers relocating some of their manufacturing capacity back into the United States. That would be a welcome change.

Another improvement is the requirement that all parties honor and protect intellectual property (IP). Given that the United States is a world leader in innovation in many critical verticals, including medical sciences, software, and manufacturing, protecting IP is a key provision that the USMCA addresses, at least on paper.

But clearly, writing a law is one thing; monitoring and enforcement is quite another altogether. This is especially applicable to Mexico, a nation rife with corruption from top to bottom and a large, uneducated workforce. Still, it’s better than what we have in NAFTA.

How much will U.S. workers benefit from the USMCA treaty? It’s difficult to tell. Implementation and enforcement won’t happen overnight.

That’s not a good thing for the working class in America and something Congress ought to think long and hard about, but probably won’t.