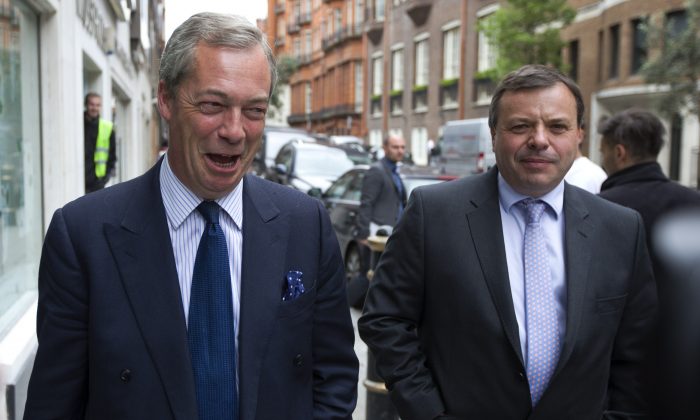 And then there were two. With the launch of Vote Leave, there is now a second major group campaigning for Britain to exit the European Union, alongside Leave.EU. Both have serious financial backing and both have considerable numbers of people working for them but only one can become the lead campaign for people wanting to leave the EU. But how do we decide which it should be?

The first question is why an official face is needed at all. In part it’s because there’s a statutory requirement to have such a grouping on either side of a referendum (of which more later).

More generally, though, it’s because a referendum is meant to be an opportunity for a debate about a matter of public interest. As such, it makes sense to have a group dedicated to providing information, guidance and justification for the options being offered. And because it’s a public matter, having official groups provides more confidence that what they do is broadly fair and accurate.

We still don’t know when the official lead campaigns will be chosen, as it all hinges on legislation that is still making its way through parliament, but a clear framework is already in place to help make that decision when the time comes. This was set out in the 2000 Political Parties, Elections and Referendums Act (PPERA).

The aim of the legislation was to modernize electoral practice, which had previously been rather chaotic. Most importantly, it established the Electoral Commission as the body with oversight of all matters electoral, including party finance, electoral law and (key here) anything to do with referendums.

Despite the current government’s efforts to circumvent its role in relation to the current referendum, the Electoral Commission has both reasserted itself and been backed by parliament as the key arbiter—most obviously in the matter of the phrasing of the question.

PPERA sets out the role of the Electoral Commission in determining who will be the official campaign group for each side. There must be one on each side and both must meet particular standards.

Fortunately, the commission has already had practice in deciding such things with the Scottish independence referendum last year. That process, which also involved deciding between different groups, established a number of criteria.

The commission looks at how each group’s goals fit with the referendum outcome it supports, how much support it has to become the official campaign and whether it has the resources to do it. It also looks at how the group intends to engage with other campaigners, to ensure that it might reasonably be considered to represent the full spectrum of views on that side. Necessarily, that’s hard to demonstrate, but a willingness to talk about allowing different voices to come through is a key part of that.

As Mark Wallace, executive editor of Conservative Home has argued, it comes down to cash, competence, and cross-party-ness. While Wallace felt Vote Leave would make the stronger candidate, it might not be quite so simple in practice.

It’s worth recalling, for a start, that Vote Leave is much more focused on securing the official title than its rival Leave.EU. It has stressed its cross-party and non-party credentials and has put in much more groundwork into the campaign.

Leave.EU, by contrast, has the feel of a group much more clearly focused around the interests of its founder, Arron Banks. This impression was only reinforced when UKIP leader Nigel Farage decided to back the campaign (Banks is UKIP’s largest donor). That UKIP’s only MP, Douglas Carswell, has chosen the opposite team hasn’t helped matters much.

However, both groups have made efforts in the right direction. They have been bringing in different voices, putting substantial funding behind their organizations and generally working hard to be credible options. If Farage can bring UKIP’s supporters and organization with him—Carswell notwithstanding—then Leave.EU will gain a significant advantage. Vote Leave does not have an equivalent body of local activists to tap into.

And all of this speaks to a bigger matter. Ultimately, the designation issue will not be the crucial one in this referendum, so long as the two groups (plus any others that pop up along the way) can work together.

This happened in Scotland, where the “No” campaign benefited from the support of various groups. Whether the leave camp can be as civil with one another is another matter, given the awkward personality politics involved. Whoever wins the designation will have to remember that this is only one (small) step in a much bigger fight.

Simon Usherwood is a senior lecturer in politics at the University of Surrey in the U.K. This article was previously published on TheConversation.com.