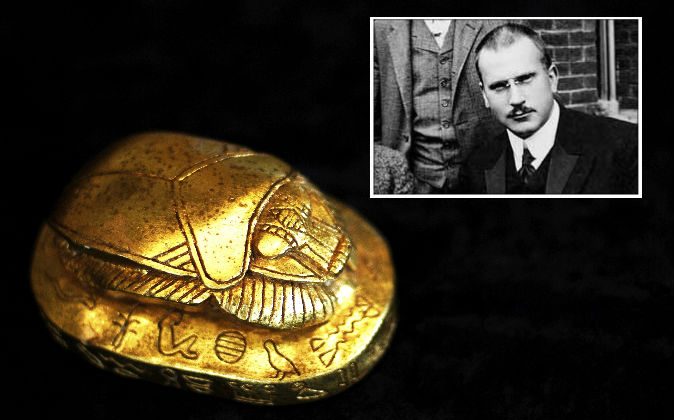 Carl Jung handed his patient a scarabaeid beetle as she described a dream about a scarab beetle, using a strange coincidence to help her on her quest for psychological change. Scarab beetle (Cristian SC/iStock) Carl Jung (Public Domain)
Beyond Science

Psychiatrist Carl Gustav Jung brought us the term “synchronicity,” which literally means “falling together in time.” Synchronicity describes the surprise that occurs when a thought in the mind is mirrored by an external event to which it has no apparent causal connection.

It is a type of meaningful coincidence, and Jung’s musings on it are an important historical step on the way to developing a science of coincidences.

As I develop Coincidence Studies, I look to the usefulness of coincidences. I analyze the role people play in creating their own coincidences. While shaping this previously abstract, philosophical topic into a more solid science, its magic is not lost on me. In fact, it is that transcendental feeling created by coincidences that started my quest. I suppose this is the case to a certain degree in all scientific exploration.

Jung wrote of a therapy session in which he used a meaningful coincidence to help a patient change.

During my late 20s I was like a boy who found a tunnel to a strange new land that it seemed few people had visited. It was the Coincidence Forest. Like new species of birds and trees and plants, there were all kinds of coincidences there. Magic resonated in that place. I began to describe and categorize them. I ran back through the tunnel to tell other people what I saw. Most of them did not know what I was talking about. Maybe I wasn’t describing them well enough. Then I found Jung and other writers who knew something about these things they called synchronicity or serendipity.

He did not examine the role we play in creating our own coincidences.

Jung saw the magic in coincidences, but paid little attention to their potential usefulness. He focused mostly on those aspects that transcend the concerns of human ego consciousness. He did not examine the role we play in creating our own coincidences. Jung wrote of a therapy session in which he used a meaningful coincidence to help a patient change. I will summarize Jung’s experience and analyze it (with the help of prominent Jungian scholar Roderick Main), as a starting point to explore coincidences.

Jung Opens the Window to Coincidence

A young woman of high education and serious demeanor entered Jung’s office. Jung could see that her quest for psychological change was doomed unless he was able succeed in softening her rationalist shell with “a somewhat more human understanding.” He needed the magic of coincidence. He asked for it, searched his surroundings for it. He remained attentive to the young woman, while hoping something unexpected and irrational would turn up.  As she described a golden scarab—a costly piece of jewelry—she had received in a dream the night before, he heard a tapping on the window. He looked and saw a gold-green glint. Jung opened the window to coincidence. He plucked a scarabaeid beetle out of the air. The beetle, closely resembling the  golden scarab, was just what he needed—or just what she needed. “Here is your scarab,” he said to the woman, as he handed her a link between her dreams and the real world.

“Here is your scarab,” he said to the woman, as he handed her a link between her dreams and the real world.

What Does It Mean?

Jung saw a need for “human understanding” to break through his patient’s resistance to his treatment. Though it isn’t clear what “human understanding” meant to Jung in this case, we can infer that it contrasts with the excessive rationality that Jung says characterized the patient. It is clear that he sees the coincidence as a way of achieving his therapeutic goal. Main said, “In Jung’s view, the synchronicity does what he himself could not do, but what he knew needed to be done. In a sense, it supplements his technique but doesn’t add to his knowledge.”

In my study of coincidences, I have found that coincidence creation favors the prepared mind. I hope to help people find useful coincidences in their lives with greater frequency, as Jung was able to do here. He was watchful, expectant.

Main said, “This state of hope for the unexpected on Jung’s part forms the inner, psychic component of  the synchronicity for him, the outer, physical component of which is the actual ‘something unexpected and irrational’ in the form of the scarabaeid beetle.”

During psychotherapy sessions, it is commonly understood that therapists do not answer the phone, nor answer knocks on the door (except under unusual conditions). In Jung’s day, the rules of therapeutic behavior were far less determined and clear. Jung broke the pattern of the expected therapeutic routine, and of the patient’s thinking, noted Main. I have found that departing from routine can help people increase the frequency of useful coincidences in their lives.

“There is plenty of indication that Jung did not always adhere to the kind of analytic ‘abstinence’ that might characterize a modern analyst,” Main said. “He elsewhere recounts singing to a patient a tune that came into his head during their session and, in another case, showing a patient a book from his library. It seems that he did whatever he intuited would be therapeutically effective.”

​Jung was a conduit for the scarab coincidence. Had he not opened the window and let the beetle in, the connection might never have been made between the woman’s inner and outer worlds. The scarab beetle also had significance for Jung. It had appeared previously as a symbol in his own visions. Perhaps this added to his instrumental role in creating the coincidence.

Lastly, we will discuss the usefulness of the coincidence. Jung declared that the coincidence broke down the patient’s resistance, and treatment could be continued with satisfactory results. He gives no further details of the treatment or its results. The implication is that this one intervention made everything go smoothly. This idealization of the therapeutic process is more fairy tale than real world. The “how” of this magical effect is not explained. Through Coincidence Studies, we may come to understand this “how” more clearly.

“I, too, picked up this fairy tale quality to Jung’s narrative,” Main said. “It is interesting in this context to recall that fairy tales (and myths) are sometimes considered to have originated as responses to anomalous events. Jung’s psychology as a whole provides a framework for extrapolating how the synchronicity with the scarab might have had ‘magical,’ therapeutically beneficial effects.”

Just as Jung was instrumental in bringing about the coincidence of the scarab beetle, he was instrumental in bringing the idea of synchronicity to the world. Synchronicity is like the golden scarab, which he handed us with an air of great mystery, with fairy tale magic. I hope, through Coincidence Studies, to better understand synchronicities and make them more useful on a larger scale.

Epoch Times reporter Tara MacIsaac co-authored this article. Follow @TaraMacIsaac on Twitter, visit the Epoch Times Beyond Science page on Facebook, and subscribe to the Beyond Science newsletter to continue exploring ancient mysteries and the new frontiers of science!

This article was previously published by Psychology Today, the first of a series of articles by Bernard Beitman, MD, on the science of synchronicity and serendipity. Beitman is a visiting professor at the University of Virginia. He is the former chair of the University of Missouri-Columbia department of psychiatry. See his blog, Connecting With Coincidence, to learn more about Coincidence Studies.