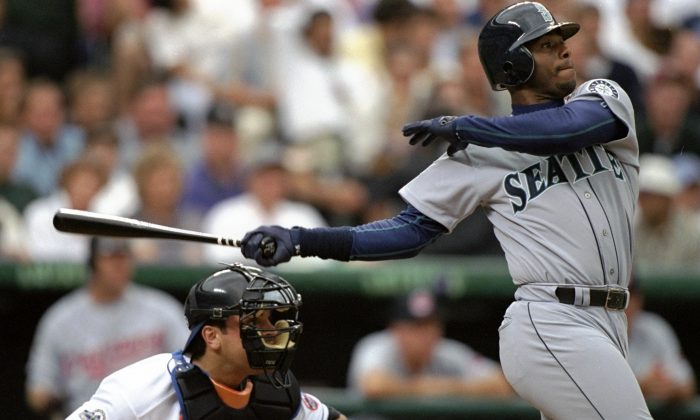 Ken Griffey Jr. hit 630 home runs and was named to 13 All-Star teams during his 22 seasons in the major leagues. (Brian Bahr/Allsport/Getty Images)
Baseball

How Was Ken Griffey Jr. Not a Unanimous Hall-of-Fame Selection?

Lost in the hoopla over Ken Griffey Jr.. earning the highest-ever voting percentage for a baseball player voted into the Hall of Fame (99.3 percent, named on 437 out of 440 ballots), is the obvious question of how in the world could three voters actually leave him off—and ever be taken seriously again?

The much-loved Griffey’s accolades are right up with the best of them. The five-tool superstar made 13 All-Star teams, won 10 Gold Gloves, seven Silver Sluggers, four home run titles, and was the 1997 AL MVP. This was all despite the second half of his career with Cincinnati being marred by injuries that left him a shell of his former self.

Clearly, these are not accolades that kept someone off three ballots. You could make a similar (though not as strong) case for the very popular Mike Piazza too.

Even though Piazza wasn’t as strong a defensive player as Griffey, he is widely considered the greatest hitting catcher of all time. (The catcher position is the most demanding job on the field and generally has the shortest lifespan of any position, given the incredible amount of strain it puts on the knees.)

Despite the wear and tear on Piazza’s legs, though, the longtime New York Met and Los Angeles Dodger somehow managed to hit 396 home runs as a catcher—an MLB record—and 427 overall. The 12-time All-Star also boasted nine seasons of 30 or more home runs—more than double any other catcher’s total. In addition, his .362 batting average in 1997 was, at the time, the second-best ever by a catcher—trailing the one and only Jack Clements who hit .394 back in 1898. (Joe Mauer hit .365 in 2009.)

All of these achievements got Piazza the Hall call, yet it took four tries for him to make it—another mystery. Why did only 57.8 percent of the voters put Piazza on their ballots on the first try, and then only 83.0 percent vote for him this year?

The senior members of the BBWAA (Baseball Writers’ Association of America) are the ones who do the Hall of Fame voting. Here’s how it works: Players are eligible for election five years after retirement, and as long as they garner at least 5 percent of the vote, they get to stay on the ballot for 10 years (it used to be 15) before being dropped.

The way the process is set up allows for a bona fide star player to eventually get elected, even if he retired at a time when a number of other stars also left the game—thus crowding the number of eligible players.

But that process doesn’t always get to play out.

Some voters reserve the first-ballot Hall of Fame designation only for those very, very, good players like Griffey—but not all of them think that way. A few voters figure that since everyone else is voting for Griffey, they’d like to see some other players get some votes.

How else can we explain Griffey’s being left off three ballots and David Eckstein getting on two of them? (The two-time All-Star Eckstein wasn’t a bad player, but only twice did he even receive MVP votes, and he never finished in the top 10—so how could he finish in the top 10 for Hall of Fame voting?)

Admittedly, rumors of steroid use during a time where baseball didn’t police it players (namely the 1990s and well into the new millennium) complicates the voting since, according to the BBWAA website, votes are based not only on a player’s record and playing ability, but also on integrity, sportsmanship, character, and contributions to the team(s) on which the player played.

It would be hard to say that the 170-pound Eckstein looked or played like one of the ones guilty of PED use—or Griffey and Piazza for that matter.

The fact remains, though, that the voters’ job isn’t to elect as many players as possible. It’s to say who the best 10 eligible players are and let the process take care of itself—even if it means leaving a clean player like Eckstein out.